On our Video Presentations page: This special report is intended to be a resource to any law enforcement personnel (investigators, first responders, detectives, prosecutors, etc.) who may have limited or no experience with technology-related crimes or with the tools and techniques available to investigate those crimes. It is not all inclusive. Rather, it deals with the most common techniques, devices, and tools encountered.

Technology is advancing at such a rapid rate that the information in this special report must be examined in the context of current technology and practices adjusted as appropriate. It is recognized that all investigations are unique and the judgment of investigators should be given deference in the implementation of this special report.

The most comprehensive listing of Crime Scene Investigation and Forensic
employment opportunities on the internet! We typically have over 100 current listings!

Other Resources on the Crime Scene Investigator Network Website 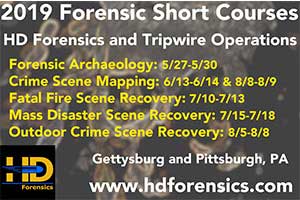 Not Subscribed to this Newsletter?