Below is the National District Attorneys Association's response to the President's Council of Advisors on Science and Technology report entitled Forensic Science in Criminal Courts: Ensuring Scientific Validity of Feature-Comparison Methods.

Testimony of
Kay Chopard
National District Attorneys Association
before
the
President’s Council of Advisors on Science and
Technology
September 30, 2016

Thank you for allowing me to provide public comment to the council. My name is Kay Chopard and I am the Executive Director for the National District Attorneys Association (NDAA). On behalf of NDAA, I will be providing comments on the latest report released to the President entitled Forensic Science in Criminal Courts: Ensuring Scientific Validity of Feature Comparison Methods or the PCAST report. NDAA is the nation’s largest prosecutor organization, representing 2,500 elected and appointed District Attorneys across the United States, as well as 40,000 assistant district attorneys.

The NDAA has significant disagreement with the logic and manner in which the PCAST report portrayed the pattern analysis and comparison disciplines of bitemarks, firearms/toolmarks, tire tread, shoe prints and DNA complex mixtures.

First and foremost, we are concerned about the pervasive bias apparent throughout the report. The majority of the working group is composed of well-known critics of forensic science and of the pattern analysis and matching methods in particular.

Second, it must be pointed out that the working group (and PCAST at large) contains not a single working forensic scientist, and this lack of scientists with real-world experience is shown throughout the report.

Third, PCAST, without a single citation to scientific authority, unilaterally declares that forensic feature comparison methods belong to the scientific field of “metrology (including statistics).” It should be noted that no metrologists were included on PCAST’s working group.

A blatant example of PCAST’s lack of practical laboratory expertise is evidenced in the statements regarding DNA mixture analysis. First, the report broadly defines a “complex mixture sample”, making no distinction between mixtures which can be deconvoluted to separate out various donors, and more complicated mixtures. Deconvoluted mixtures are reliably interpreted by using validated procedures such as a random match probability, likelihood ratio or CPI. Even highly complex mixtures can be interpreted using any of a dozen or more probabilistic genotyping softwares that have been generally accepted as reliable in the forensic genetics community.

PCAST urges courts to exclude important forensic evidence by appealing to its own authority. However, PCAST is merely a temporary advisory body, whose existence expires at the end of this administration. It should be noted that Daubert or Frye evidentiary hearings remain the legal standard upon which judges, acting as gatekeepers, determine the admissibility of scientific evidence with well-trained and experienced advocates presenting experts on each side of an issue. Indeed, the PCAST report highlights the problems associated with the format whereby PCAST members receive “testimony” from partisan witnesses without the benefit of having those presentations challenged through the “crucible of cross-examination” by well-prepared lawyers who could point out the weaknesses of proffered research.

In closing, we note the one-sided nature of the PCAST recommendation that no forensic discipline is acceptable without numerous peer reviewed and published studies. For example, the cognitive bias study PCAST relies upon to support its findings is merely a single study on an isolated topic which was not replicated by other researchers. Yet, that fact was no barrier to PCAST citing that study to generalize its findings to all forensic situations.

Prosecutors ultimately serve the criminal justice system and the public at large. Forensic evidence and forensic experts are called to testify by prosecutors and members of the defense bar every day, both to exonerate the innocent and prosecute the guilty. Judges have the ultimate authority to determine whether or not a forensic discipline is valid or lacks the requisite foundation, not the PCAST report. 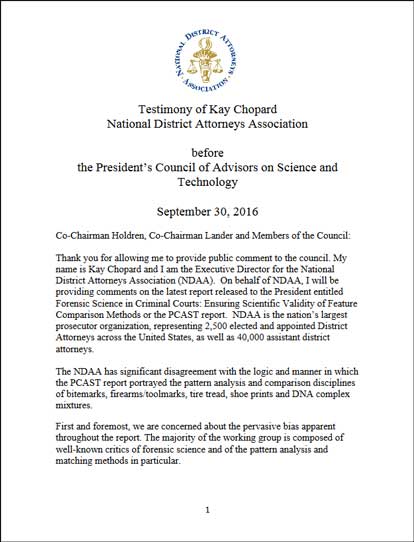