President's Council of Advisors on Science and Technology
September 2016

“Forensic science” has been defined as the application of scientific or technical practices to the recognition, collection, analysis, and interpretation of evidence for criminal and civil law or regulatory issues. Developments over the past two decades—including the exoneration of defendants who had been wrongfully convicted based in part on forensic-science evidence, a variety of studies of the scientific underpinnings of the forensic disciplines, reviews of expert testimony based on forensic findings, and scandals in state crime laboratories—have called increasing attention to the question of the validity and reliability of some important forms of forensic evidence and of testimony based upon them.

A multi-year, Congressionally-mandated study of this issue released in 2009 by the National Research Council (Strengthening Forensic Science in the United States: A Path Forward) was particularly critical of weaknesses in the scientific underpinnings of a number of the forensic disciplines routinely used in the criminal justice system. That report led to extensive discussion, inside and outside the Federal government, of a path forward, and ultimately to the establishment of two groups: the National Commission on Forensic Science hosted by the Department of Justice and the Organization for Scientific Area Committees for Forensic Science at the National Institute of Standards and Technology.

When President Obama asked the President’s Council of Advisors on Science and Technology (PCAST) in 2015 to consider whether there are additional steps that could usefully be taken on the scientific side to strengthen the forensic-science disciplines and ensure the validity of forensic evidence used in the Nation’s legal system, PCAST concluded that there are two important gaps: (1) the need for clarity about the scientific standards for the validity and reliability of forensic methods and (2) the need to evaluate specific forensic methods to determine whether they have been scientifically established to be valid and reliable.

This report aims to help close these gaps for the case of forensic “feature-comparison” methods—that is, methods that attempt to determine whether an evidentiary sample (e.g., from a crime scene) is or is not associated with a potential “source” sample (e.g., from a suspect), based on the presence of similar patterns, impressions, or other features in the sample and the source. Examples of such methods include the analysis of DNA, hair, latent fingerprints, firearms and spent ammunition, toolmarks and bitemarks, shoeprints and tire tracks, and handwriting.

In the course of its study, PCAST compiled and reviewed a set of more than 2,000 papers from various sources—including bibliographies prepared by the Subcommittee on Forensic Science of the National Science and Technology Council and the relevant Working Groups organized by the National Institute of Standards and Technology (NIST); submissions in response to PCAST’s request for information from the forensic-science stakeholder community; and PCAST’s own literature searches.

To educate itself on factual matters relating to the interaction between science and the law, PCAST consulted with a panel of Senior Advisors comprising nine current or former Federal judges, a former U.S. Solicitor General, a former state Supreme Court justice, two law-school deans, and two distinguished statisticians who have expertise in this domain. Additional input was obtained from the Federal Bureau of Investigation (FBI) Laboratory and individual scientists at NIST, as well as from many other forensic scientists and practitioners, judges, prosecutors, defense attorneys, academic researchers, criminal-justice-reform advocates, and representatives of Federal agencies. The willingness of these groups and individuals to engage with PCAST does not imply endorsement of the views expressed in the report. The findings and recommendations conveyed in this report are the responsibility of PCAST alone.

The resulting report—summarized here without the extensive technical elaborations and dense citations in the main text that follows—begins with a review of previous studies relating to forensic practice and Federal actions currently underway to strengthen forensic science; discusses the role of scientific validity within the legal system; explains the criteria by which the scientific validity of forensic feature-comparison methods can be judged; applies those criteria to six such methods in detail and reviews an evaluation by others of a seventh method; and offers recommendations on Federal actions that could be taken to strengthen forensic science and promote its more rigorous use in the courtroom.

We believe the findings and recommendations will be of use both to the judiciary and to those working to strengthen forensic science. 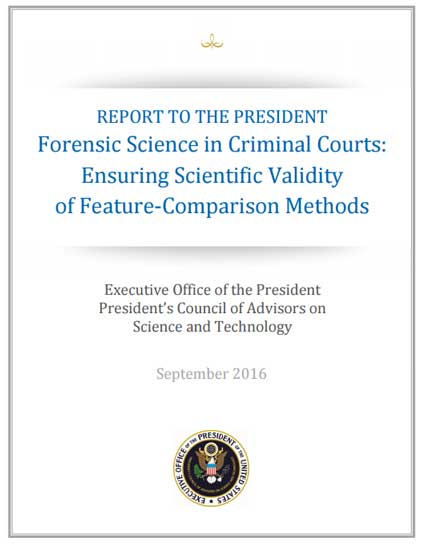