Blood shedding events occurring in snowy conditions are conceivable and potentially likely in alpine environments. An examination of the current literature indicates there is limited information on the topic of bloodstain pattern analysis (BPA) in snow or icy conditions. The aim of this study was to replicate classic bloodstain patterns including drip and spatter stains, to record observations to increase knowledge in the discipline. Due to the weather conditions during this study, the “hardness” of snow had an effect on reproducing bloodstains patterns consistently. Reproducible bloodstain patterns were produced in powder snow and icy snow, indicating the potential for investigators to reconstruct and understand the bloodshed events associated with a crime scene. Hence, the bloodstain analyst working in areas where snowfall is likely should develop an understanding of how blood will react with snow.

Crime scene examinations generally are associated with dwellings or structures. In reality many crime scenes involving bloodshed may occur outside including wilderness environments. While examination within a dwelling may take significant time to process, it will not degrade dramatically as the surrounding structure provides protection. In contrast, the outdoor scene is subjected to the full gambit of the environmental and weather conditions.

Although approximately two thirds of the Australian continent is classified as arid or semi-arid, with one third classified as desert, Australia also possesses mountainous, snow covered, wilderness areas which are popular with tourists, particularly in the winter ski season.1 As these snowy, wilderness areas become more appealing to hikers, and there is an increased potential for incidents involving blood shedding events to occur, whether criminal or accidental.

A search of the current literature was only able to locate a limited number of articles about BPA in snow and freezing conditions.2-5 James, Kish and Sutton4 indicated that, “bloodstains are frequently recognizable in snow and should be recorded.” Hence the bloodstain pattern analyst working in areas where snowfall is likely should develop an understanding of how blood will react with snow.

The location for the study was near the summit of Ben Lomond, Tasmania, Australia with an approximate height of 1600m (5200 feet) Average day time temperatures were approximately 0°C (32°F) with evening temperatures of –7°C (19°F). Blood was drawn from a healthy male and used immediately to create spatter and drip stains, which were the focus of this research. Transfer stains were omitted due to the unlikely possibility that they would produce recognisable bloodstain patterns.

The bloodstains were produced over two days, with the first day on hard, icy snow and the second day on soft, freshly fallen powder snow. The effect of snow covering existing bloodstains was also observed. 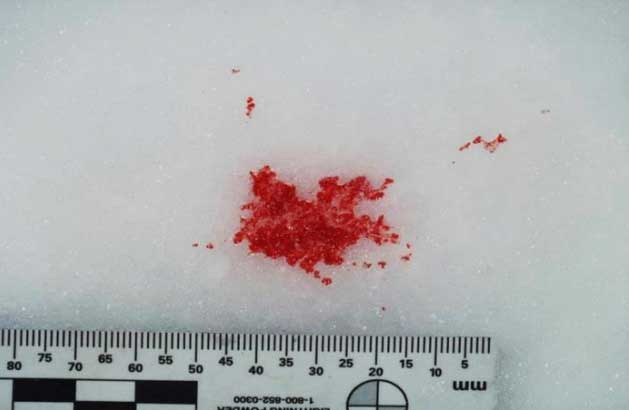 Figure 1. A drip stain onto icy snow from a height of 50 cm. Note the irregular shape and deformed satellite spatter.

The blood was dropped as per Day 1 onto an approximate 5cm depth of soft, powder snow which had fallen the evening before. Drip bloodstains from the previous day were still observable under the layer of snow (Figure 2).

Individual drip stains produced from heights of 10cm, 20cm and 30cm failed to penetrate the snow and displayed similar irregular perimeter characteristics, although they were notably less distorted than the drip stains on the icy snow. 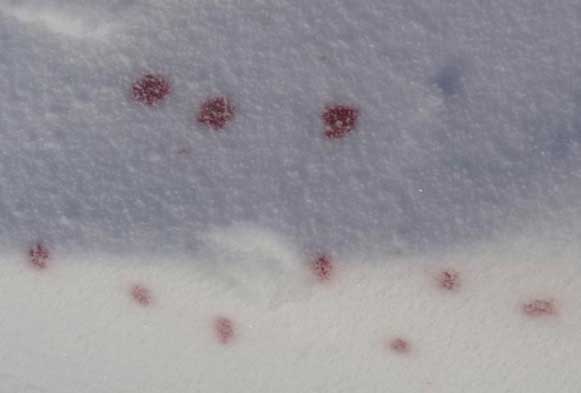 Figure 2. Bloodstains deposited onto icy snow (from Day 1) observable under a layer of snow which fell between Day 1 and Day 2. 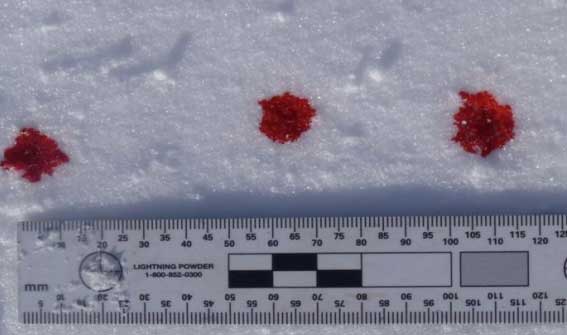 Figure 3. Drip stains on soft snow from a height of 30cm. Note the similar size and shape, with irregular stain perimeters.

The drips stains gradually increased in size when dropped from increasing heights between 10cm to 30cm inclusive, with the diameter ranging between 12mm and 15mm across the widest part of the stain (Figure 3). At 50cm and 100cm the blood drops penetrated into the soft snow causing small depressions. The size of the resultant drip stains in the soft snow were reduced to approximately 7mm to 8mm in diameter, with the perimeter edge sharp and near circular in shape (Figures 4 and 5). Satellite stains were not observed in soft powder snow for all heights.

Drip patterns were produced by dripping blood into blood on soft, powder snow (Figure 6). As the warm blood accumulated, the central portion of the blood pool melted and penetrated the snow. The blood flowed vertically downwards producing a drip pattern with three dimensional characteristics. The satellite spatter remained on the surface of the snow. 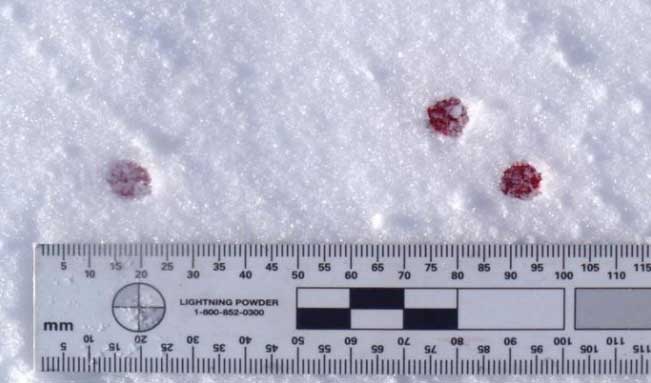 Figure 4. Drip stains from 100cm in soft snow resulting in a depression in the snow, reduced stain size (compared to 30cm drop height) and a near circular perimeter. 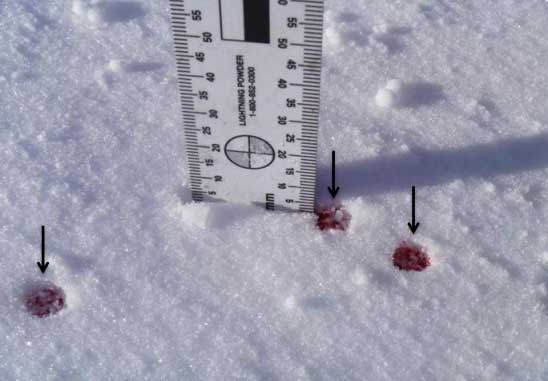 Figure 5. Drip stains in soft snow from 100cm angular perspective displaying the depression into the snow. 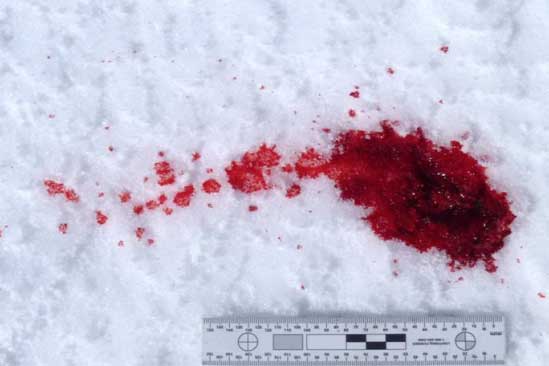 Figure 6. Blood dripping into blood in soft snow conditions. Note the smaller satellite spatters have not penetrated the snow, whereas larger general spatter has.

Using a small blood sample vial, spatter stains were produced by projecting blood onto soft, powder snow using a lateral cast off action at an approximate height of between 80cm to 100cm. Small blood drops produced typical spatter stains that were elliptical in shape with a spine angled away from the direction of projection. It was observed that the larger blood droplets upon impacting the snow produced a concave depression in the snow at the impact point. Much of the snow in the concave depression was unstained or lightly stained, with the blood accumulating at the distal end of the bloodstain (Figure 7).

The larger blood drops produced larger depressions at the initial contact point with the snow. The amount of bloodstained snow inside the depression varied with an accumulation of blood at the distal end of the bloodstain. Smaller blood droplets did not create noticeable depressions in the snow. 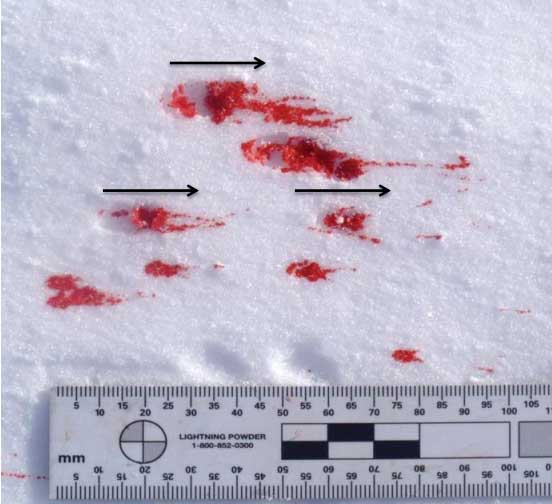 Figure 7. Spattered bloodstains into soft, powder snow. The blood drops were projected from left to right side of the image as indicated by the arrows. Depressions in the snow are visible on the larger bloodstains.

Bloodstains will almost certainly be present following blood shedding events in snow conditions. The variability of icy weather conditions affect the physical properties of snow and will likely continue to provide challenges for bloodstain pattern analysts faced with examinations in sub-zero outdoor environments. When comparing hard, icy snow to soft, powder snow considerable differences in bloodstain shapes and patterns were displayed. In all experiments, the blood drops did not penetrate the hard, frozen snow. Although Morris2 and Leak5 both reported changes in the colour of frozen bloodstains, no observable change in bloodstain colour was observed in these experiments. Rather, the frozen blood retained the red appearance of freshly drawn blood.

The most noticeable difference in stain appearance observed was the irregular shaped perimeter of drip stains on hard, icy snow compared to the near circular shape in soft, powder snow. In addition, in soft, powder snow blood drops of similar volume produced drip stains that initially increased in size up to a maximum width of approximately 15mm, when dropped from heights up to 30cm inclusive. At 50cm and 100cm the width of drip stains on soft, powder snow decreased with the blood drop penetrating the snow causing a small depression. The approximate diameter of these near circular bloodstains reduced to approximately 7mm in diameter, with the perimeter edge sharp and near circular. This is in contrast to what was expected and aligns with what is observed on rigid, non-porous surfaces, where generally the stain diameter increases with increased dropping height (Figure 8)4 until terminal velocity has been reached. 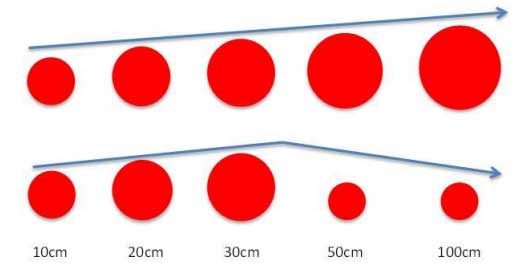 The decrease in approximate diameter was likely due to one or a combination of reasons. The porous nature of the soft snow allowed the blood drop to penetrate on impact, which inhibited the lateral spread of the blood. That is, as the blood drop contacted the snow, it was absorbed into the snow, which reduced the resultant stain diameter creating the pattern observed. It is suggested that the greater acceleration of blood dropped from increased heights is the main reason for the variation in the diameter of the drip stains in powder snow. The higher velocity and kinetic energy of the blood drop acted to compress the snow producing smaller, symmetrical drip stains with similar diameters to the blood drop that caused the stain.

The temperature of the blood drop also had an influence on stain appearance under the test conditions, in particular causing soft powder snow to melt on contact with the warmer blood, resulting in depressions in the snow. The effect of temperature was particularly noticeable for the three dimensional patterns caused by blood dripping into blood. Although Morris2 found blood droplets appeared “flash frozen” in temperatures of -16°C (2°F) this was not observed in this study at 0°C (32°F). The relative warmer temperature of the air and the snow experienced in this study likely affected the resultant bloodstain patterns.

Spattered bloodstains on hard, icy snow displayed similar physical characteristics when compared with spatter on hard, rough non-porous surfaces. The irregular surface disrupted the blood drop resulting in distorted spatter stains. In contrast, spatter angularly deposited on soft, powder snow produced two clear physical characteristics. Due to the compressible nature of soft snow, larger blood droplets consistently produced three-dimensional spatter stains, with the snow depressing at the area of initial contact and the majority of the blood culminated at the distal end of the resultant stain depression. The blood drops with larger mass and higher energy easily depressed the snow at the area of initial contact, which then gouged out the snow in the direction of flight causing concave, three-dimensional patterns. The depressions were deeper at the end of initial contact, and shallowed as the blood travelled across the snow. Blood pooling at the distal end is another a feature also observed in spatter stains on non-porous surfaces. Understanding this potentially diagnostic feature of spatter in soft, powder snow may aid bloodstain pattern analysts during investigations.

Although there are a wide variety of snow types from icy snow through to soft, powder snow, and all variations between, documentation bloodstains in these conditions may provide investigators with insight into events leading to their deposition. The irregular shape of some bloodstains may make distinguishing between spatter and smaller transfer bloodstains difficult. This study has shown that there are potential diagnostic features that may assist in the interpretation of spatter and drip stains in different types of snow.

I wish to take this opportunity to express my sincere appreciation for the scientific guidance of Ted Silenieks in the submission of this article. Without his valuable assistance, this work would not have been completed.

Bloodstain Pattern Analysis in Snow  Copyright by J. David North. Copyright for this article is retained by the author. This is an Open Access article distributed under the terms of the Creative Commons Attribution-NonCommercial-NoDerivatives 4.0 International License which permits unrestricted noncommercial use, distribution, and reproduction, provided the original work is properly cited and not changed in any way. Based on a work at Journal of Bloodstain Pattern Analysis, Vol. 32 No. 1 March 2016, https://iabpa.org/docs/March_2016_JBPA.2.pdf.