Below is the American Congress of Forensic Science Laboratories response to the President's Council of Advisors on Science and Technology report entitled Forensic Science in Criminal Courts: Ensuring Scientific Validity of Feature-Comparison Methods.

The United States President’s Council of Advisors on Science and Technology (PCAST) has released a report that portrays in an unfavorable light specific forensic science disciplines that are in common use today.1 Drawing the most pointed criticisms were:

The PCAST report, in both implicit and explicit terms, calls on the American judiciary to take formal notice of these disciplines as being insufficiently validated and, therefore, inherently unworthy of the respect they have earned in courts of law in over a century of jurisprudence and scientific evaluation. The PCAST report identifies two priorities regarding the future of these disciplines. First, PCAST cites “the need for clarity about the scientific standards for the validity and reliability of forensic methods.” Second, it addresses “the need to evaluate specific forensic methods to determine whether they have been scientifically established to be valid and reliable.”2

These PCAST priorities seem to suggest that perhaps this report should not have been published at all. Unfortunately, it was born of an imbalanced and inexperienced working group whose make-up included no forensic practitioners nor any other professionals with demonstrated experience in the practice of forensic science. The Chair of the aforementioned working group, Eric Lander, sits on the Board of Directors of the Innocence Project,3 a legal-activism group that has itself been publicly criticized on numerous occasions(including within peer reviewed literature) for the unfairness of its public statements and the conflicts of interest that have long called into question its motives. In addition, the working group’s writer, Tania Simoncelli,4 has publicly authored previous opinions that DNA database collections violate civil liberties.5

Our intent is not to disparage any individuals or their motives. But we have no choice but to recognize the relevance of these biases as we evaluate the legitimacy of the PCAST report. Indeed, forensic science is being judged by such a standard. PCAST should be as well. Yet our greatest concern is that the intellectual exercise of evaluating the reliability of forensic science in the United States is too often ignorant of the ugly realities associated with solving crimes like murder and rape as quickly and accurately as possible. For all the priorities identified by PCAST, none are more important than those that preserve public safety.

Interestingly, the PCAST report comes during a presidential administration that has demonstrated a deep sensitivity to the needs and demands of trial attorneys, criminal defendants, and advocates of sweeping criminal justice reform. Future administrations may take a different approach, tending to champion positions traditionally held by police and prosecutors. We have no opinion in these matters. But these swings in ideological perspective cause commensurate changes in how forensic science and its role in our criminal justice system are perceived. In the current political climate, forensic science is looked upon with far more suspicion and, in some cases, distain than would be the case in other political circumstances. And because forensic science is both expected and apt to remain independent of these political currents, it is vulnerable to being misportrayed and even bullied in a way that compromises its occupational stability. To truly strengthen forensic science, therefore, it will be necessary to somehow insulate it from the turbulence caused by changes in political winds. PCAST did no favors in this regard.

Nor did PCAST, in our collective opinion, do its due diligence to ensure a reasonable balance of perspectives on these critical issues. It failed to objectively and completely evaluate the overwhelming evidence of strength and reliability in forensic science. Therefore, its report on forensic science will likely go down in history as a political phenomenon, not a scientific one.

Forensic science is an applied science. To argue that it can improve is honorable. To broadly characterize it as lacking scientific validity without proper justification is irresponsible and inaccurate. The work, for example, to add probabilistic studies to our existing validations, to standardize wording for clarity in testimony, to strengthen the communication of uncertainties in conclusions, and to protect against the negative influences of cognitive bias are to be applauded. Yet these are part of an ongoing effort by the forensic science community itself to evolve as all occupations do. And they are ultimately elevating the professionalism with which forensic science is practiced.

Moving forward, however, all forensic science professionals are encouraged to continue doing what they have done for decades — advance the profession with thoughtfulness, self-restraint, introspection, scientific reasoning, quality control, experimentation, and the continuous consideration of new ideas. Let the chips fall where they may. Of course, we must all be open and honest about the uncertainties and variables that exist in forensic science and strive to attach clarity and meaning to those items of evidence with which we are being entrusted. And as unseemly as the ideological battles that are slowly reshaping our criminal justice system may feel at times, they must never distract us from meeting our public responsibilities.

The American Congress of Forensic Science Laboratories (ACFSL) is the only membership organization in the United States structured to fully represent and communicate the interests of all professionals employed in the forensic laboratory sciences. Several reputable organizations exist to serve the forensic sciences and particular areas of specialized expertise, but only the ACFSL has membership opportunities for all levels of responsibility and areas of specialty found in American forensic science laboratories. It is our mission, therefore, to unite and represent all current and former professionals employed by United States forensic science laboratories, and to create the conditions necessary for our members to serve the American criminal and civil justice systems with confidence and integrity.

The above is a statement by the American Congress of Forensic Science Laboratories (ACFSL). ACFSL publishes position statements strictly as a service to its members and for the benefit of the forensic laboratory sciences. This statement does not necessarily reflect the official position of any person or organization with whom the members of our Executive Board, staff, or volunteers may be affiliated or employed. Information contained in this position statement is neither exhaustive nor exclusive, and its accuracy may be affected by a wide variety of variables, people, and circumstances. ACFSL reserves the right to modify or rescind its position statements at any time. ACFSL may elect to publish, in some circumstances, dissenting opinions by our members or the public at large. 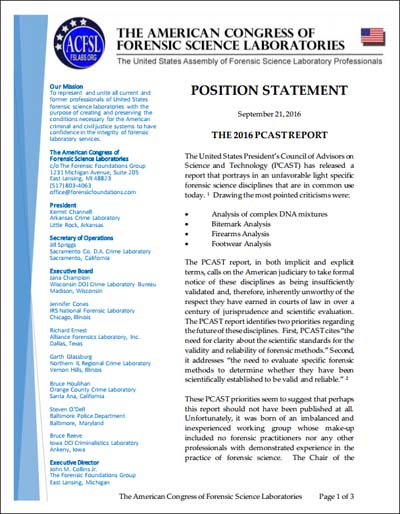