Impression evidence can be either 2-dimensional or 3-dimensional. The 2-D footwear impressions are those that are usually transferred or deposited indoors. This impressions is usually found on top of hard surfaces or substrates. I have seen footwear impressions on items like doors, window sills, counter tops at businesses and banks, tile floors, on top of items of furniture and even on the chest of a deceased female that was believed to have been beaten and stomped to death. It is another valuable tool for law enforcement. The search, development, and recovery is similar to recovering a latent fingerprint impression. The same tools and techniques are used in both recoveries.

The search for the 2-D footwear impression should start at the point of entry or exit and continue through all pathways leading to and from those areas, including any rooms or areas where there is indications that things have been moved or disturbed by the suspect(s).

A few items from your fingerprint kit should get you started: 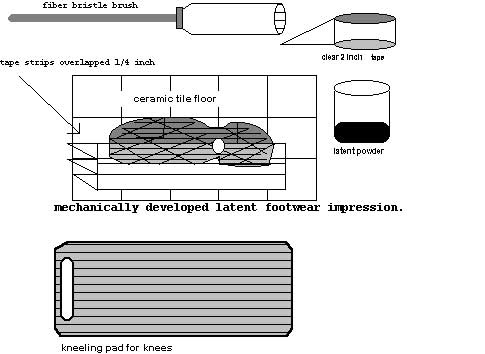 After developing a latent impression remove the excess powder by blowing on the surface, using a small can of compressed air, or brushing lightly across the surface in the opposite direction. This assures a clean lift with no air pockets or fish eye. Air pockets are the tiny bubbles of air that will hinder the tape or lifter from being smoothly applied over the surface. The air pockets are caused by excess powder and other miscellaneous debris on top of the surface.

Evidence is photographed for purposes of orientation and as a security measure just in case the evidence is lost during the recovery stage. With the footwear it may be necessary for the examiner to use the photographs to assist in the examination process. We should be aware that all crime scene photography is done from general to specific. That gives us multiple photographs from our general overall orientation, relationships, to specifics in detail. 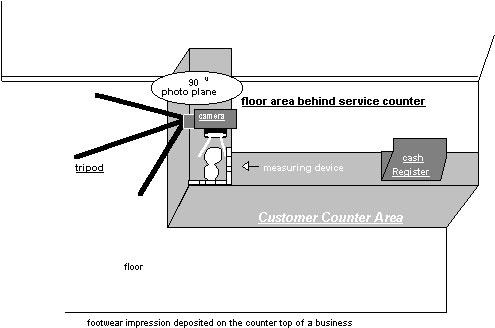 After all photographs have been taken the lift can be completed. To remove the developed footwear impression, firmly apply and smooth the tape or lifter across the surface. If tape is used it will need to be laid and overlapped in strips. Similar to a multiple lift on a full palm impression.

Start at one edge of the tape, by firmly running the index finger along the center of the tape as it is being applied to the surface. After all of the strips have been applied then firmly smooth the tape from the center out to each edge. Use as many strips as you need to cover the entire footwear impression. Run a fingernail or pencil along the seam of the overlapped sections of tape to fill in the gap. To keep static from building in the lifter or tape, causing it to cling and roll, remove the tape by pulling and maintaining an equal continuous amount of pressure keeping about a 45 degree angle on the tape as it is lifted.

Place the lift on a backing medium. A backing medium is a card designed to hold the recovered latent lift. The backing medium can be anything from a shirt box top to a sheet of art paper. Information as to the date, a police or investigation case number, the investigator making the lift, and where the lift came from should be placed on the lifting medium. 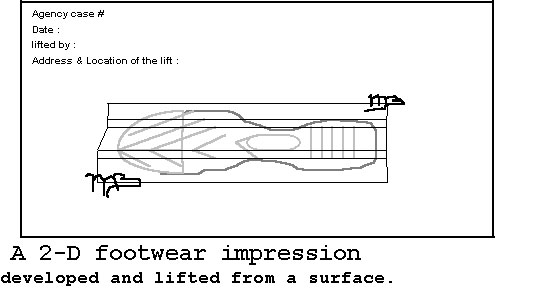 The completed lift should be placed in a large glassine bag or paper envelope. The package is sealed with evidence tape and the appropriate information should be placed on the outside of the bag.

Wear a respiratory (dust) mask , gloves and eye protection when working with powders for long periods. It is important that the investigator/technician be aware of the tools that they are using in the field as well as in the lab. The Manufacturer Safety Data sheet (MSDS) is available with all products and should be read on any items used by the technician/investigator. This will assure that the investigator is aware of any potential safety hazard that might exist with the products being used. Safety should be the top priority for the investigator. A kneeling pad or knee pads will assist the investigator from any strain on the knees while working on the surface, it will also keep the powders from being transferred to the trousers.

Mike Byrd (1955-2005) joined the Miami-Dade County Police Department in 1983 and started with the Crime Scene Investigations Bureau in 1987. He took an exceptionally active part in the science of forensic crime scene investigations, including development of new techniques, publishing methodology of crime scene procedures, and teaching. Mike developed new techniques for gathering and cataloging crime scene evidence including the lifting of fingerprints, vehicle tire impressions, and footwear impressions.

Mike's methods and analysis withstood the scrutiny of the criminal justice process. He published more than thirty crime scene articles on crime scene evidence collection and for the International Association for Identification and was awarded The Good of the Association Award in 2002 for his innovative identification methodology and techniques. He taught crime scene investigation procedures and techniques at police departments around the country and took great pride at instructing smaller Florida police departments in the latest techniques in evidence gathering.

Mike performed the tough detailed oriented forensic work at many major crime scenes and disasters over two-decades. He gathered, processed, and identified the DNA evidence used to convict the Tamiami Strangler for a string of heinous murders in 1994. His thoughtful gathering of evidence at the Valujet crash allowed families to reach closure for the deaths of loved ones.