At a crime scene, we regularly find latex or vinyl gloves which have been left behind by the perpetrators. As crime scene officers, we are then confronted with the question of what to do with these gloves. We know these used gloves can contain fingerprints but how to make them visible?

In most cases such gloves are secured only for DNA investigation. Sometimes there are attempts to make prints visible, usually with chemical methods, but as most of us probably have experienced, the results of chemical methods are usually not very satisfying.

Usually perspiration and the powder in these gloves are blamed for having destroyed the latent fingerprints.

Up until 2001, I succeeded only once in my 30 years as a crime scene officer to visualize a fingerprint in a latex glove. I had tried many times to treat disposable latex and vinyl gloves with chemical means, but virtually all these attempts failed to produce a result.

Then in the middle of 2001, a collegue handed me four latex gloves which had been thrown away by burglars when leaving a crime scene. As so often before, I started working on the gloves, treating two of them with ninhydrin and the others with cyanoacrylate fuming. Unfortunately, both methods failed to visualize any prints. 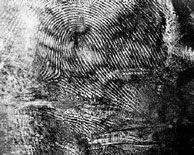 After this disappointment, I wondered if it might be possible to get any fingerprints off of these gloves using a black gelatin lifter. With a piece of PVC tubing, stuck in the fingers of each glove, every finger was rolled ten 360° revolutions over a length of black Gellifter.

To my amazement, a number of excellent prints were lifted from these chemically treated gloves. I had a strong suspicion that this could be a real breakthrough.


Looking for a solution

Were these results with the four latex gloves a coincidence, or could it be that lifting prints with a Gellifter was the solution to a big problem?

To get more certainty, I started a comparative examination, looking at all the methods that have been mentioned to visualize prints in gloves and at the lifting with the Gellifter.

Researching the internet, I found that collegues around the world have used the following methods: 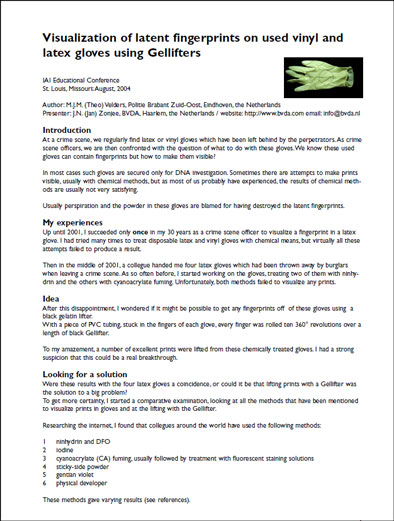