A "Hands On" Approach to Understanding Gunshot Residue


When an investigator processes and reconstructs a crime scene where shots were fired, determining who may have shot the firearm may be critical to the case. The lab may be able to assist with such investigations through the use of gunshot residue (GSR) analysis. GSR is typically expelled from a firearm upon discharge and can land on individuals in close range of the firearm. GSR kits are designed to collect these particles, and the Trace evidence section of the lab has the equipment and expertise to analyze these kits. While GSR testing can provide important information for your case, there are limitations in what the results indicate in a shooting incident. 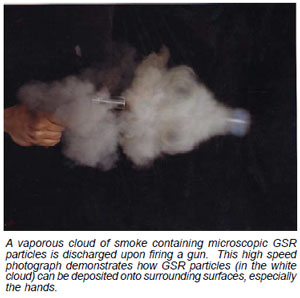 GSR testing involves identifying the presence of microscopic particles consisting of lead, barium, and antimony. These GSR particles are the residue that is produced from the components present in the primer of a cartridge. When the firearm is discharged, these particles are ejected from the cylinder gaps, ejector ports, and the end of the barrel, resulting in a plume of residue in the air around the gun. This residue can land on nearby surfaces and objects, including the hands of the shooter. To determine if GSR could be present, GSR kits are collected by touching unique adhesive stubs to the hands of individuals suspected of firing a weapon. The Trace evidence section at the General Headquarters Lab in Jefferson City analyzes the adhesive stubs for GSR using a scanning electron microscope (SEM), issues reports on the findings, and testifies in court.

Once GSR is deposited onto the hands of a shooter, the particles can then transfer from one area of the hand to another (which could change the scenario of a left handed shooter to a right-handed shooter), or even to items handled by the shooter. One study demonstrated this by testing the steering wheels in the vehicles of three firearms examiners. All three steering wheels tested positive for GSR, even when the sampling was conducted 1-4 days after the examiners had last discharged a firearm.

GSR generated from a firearm discharge can be deposited onto objects in close range, which include the firearm itself. A non-shooter who handles a firearm can transfer GSR to his/her hands. Moreover, touching other surfaces, such as tabletops, clothing, or automobile interiors that are contaminated with GSR can also lead to transfer of GSR to a non-shooter's hands.

The concept of GSR transfer is important to consider when investigating crime scenes involving a shooting because the actual scenario could be entirely different than what the GSR results indicate. For instance, in a suicide, GSR can contaminate the suicide victim's clothing and household items. If a non-shooter then comes into contact with any of these surfaces, GSR may transfer to his/her hands, suggesting the non-shooter discharged the firearm. Similarly, in drive-by shootings, occupants in the vehicle other than the shooter can potentially end up with GSR on their hands just by being in the vicinity of a discharged firearm.

In essence, positive GSR results only determine that GSR is present, not how those particles came to be there.

A common misconception is that a negative GSR result is proof that a person did not actually fire a weapon. There are several mechanisms as to why someone who fired a gun could test negative for GSR.

GSR analysis instruments have a detection limit. Issues such as GSR particle quantity and size may render a positive stub below a detectable threshold. Therefore, someone who fired a gun may test negative because a detectable amount of GSR was not deposited.

Time lapse between the shooting of a weapon and the collection of the kit may also lead to negative GSR results. As time passes after discharge, GSR particles can be removed from the hands by contact with other objects or by hand washing. After 6-8 hours, analysts would not expect to detect GSR on an active person.

Furthermore, blood or other moisture can defeat the adhesive on the kit collection stubs so that GSR present on the hand may not be effectively transferred to the stubs. With this reasoning, a negative result can occur when the wound was self-inflicted. 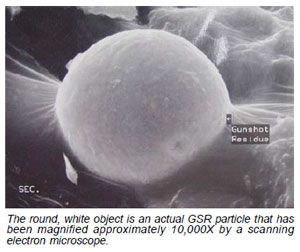 GSR detected on the hands of a homicide or assault victim will not yield information regarding the posture or position of the hands in relation to the firearm at the time the shooting occurred. GSR is expelled from the gun in all directions, and the amount of particles discharged and deposited will vary from shot to shot.

Often, GSR kits are submitted from several individuals for elimination purposes. Keep in mind that the absence of GSR on a person's hands does not eliminate the possibility that he/she fired a weapon. In some cases, the eliminations do test positive. An example is an incident where one shot was fired, but several people, who were associated with the crime, tested positive for GSR by being in the vicinity of the firearm when discharged.

The limitations of GSR analysis have ramifications for individuals associated with a crime scene, specifically victims. Generally, kits should not be collected from victims, whether the incident is a homicide, assault, or suicide. Based on the experience of the forensic community, between 10-20% of suicide GSR kits test negative for GSR. Additionally, our experience demonstrates that homicide or assault victims shot by someone else can test positive for GSR. One test, for example, demonstrated that GSR can travel in the direction of the bullet as far as 18 feet. Finding GSR on a shooting victim's hands does not differentiate between a self-inflicted wound or a homicide. Likewise, a negative GSR result from a suspected suicide does not mean that someone else fired the weapon.

Because GSR kits cannot demonstrate whether a shooting was self-inflicted or not, the MSHP lab will no longer routinely analyze kits taken from shooting victims after September 1, 2008.

There are limitations in what GSR results can tell investigators who are reconstructing a shooting incident. However, GSR analysis still has a place in the investigation as a useful tool in putting the pieces of the puzzle together, especially when GSR results are interpreted in conjunction with other evidence. The science of GSR detection is sound, and the lab can confidently report the presence or absence of GSR. The real challenge is in the interpretation of how the GSR was deposited.

If you should have any questions regarding GSR kits or the policy change, please contact any criminalist in the Trace Evidence Section at 573-526-6134.