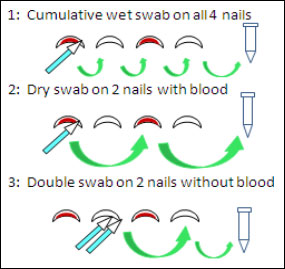 During a physical assault, biological evidence can be transferred between victim and assailant. For example, if a victim scratches the assailant, cells can be trapped beneath fingernails, thus nail evidence is regularly collected by practitioners such as sexual assault nurse examiners and medical examiners, and sent to the crime laboratory.

However, the best techniques for collecting and processing such evidence have never been established. This study compares multiple methods for isolating exogenous cells from nail evidence, for purifying DNA from it, and for producing STR profiles.

Based on the results, a protocol was developed that was applied to scratchings, wherein females scratched male volunteers on the forearm using a set amount of force, and scratchings were processed using the most effective procedures. The prevalence of cell loss or cross contamination using certain nail processing techniques was also examined, as was cell loss and cross contamination during nail transport and the influence of nail polish.

Overall, this study identified strengths and weaknesses in each step of fingernail evidence processing.

Various methods are used to collect fingernail evidence, which can include clipping the nail, swabbing beneath the nail using a small, moistened swab, or scraping beneath the nail, generally using a wooden applicator and collecting the debris. Once collected, nail evidence is packaged and transported to the crime laboratory, where it may or may not be processed. Despite nail evidence collection taking place on a daily basis, there has been minimal effort to optimize or standardize methods for collecting, processing, and analyzing nail evidence. This study researched all methods to determine which yielded the best collection and analysis. 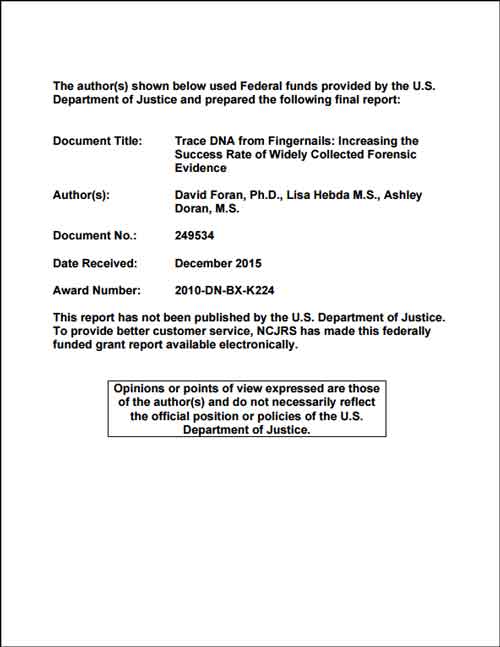