The use of this concept will aid the crime laboratory imaging specialist and forensic odontologist in their analysis of bite marks (patterned injuries).

This research project was proposed to study whether it is possible to replicate the patterns of human teeth (bite marks) in porcine skin, be able to scientifically analyze any of these patterns and correlate the pattern with a degree of probability to members of our established population data set. 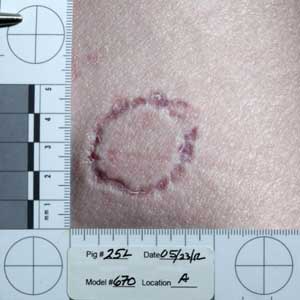 Bite marks were produced on twenty-five pigs with a bite pattern replication device using 50 sets of models of blinded dentitions. The models were selected randomly from a previously quantified data set of 469. Prototyped dental models were mounted on a semi-automated mechanical device which records the model number, physical location on the pig where the force applied and the duration it was applied. Four patterns were created on each side of twenty-five anesthetized pigs in predetermined areas. These sites were tested previously in a pilot study; notably the hind quarter, abdomen, thorax and fore limb. Digital photographs of the patterned injuries (bite marks) were exposed following the guidelines of the Scientific Working Group on Imaging Technology (SWGIT) and the American Board of Forensic Odontology (ABFO). Two hundred images of each dental arch were selected from the eight hundred photographs taken during the laboratory sessions and analyzed biometrically using a previously validated software program. Images were categorized as complete, partially complete or unusable, based on the presence, partial presence or absence of the six anterior teeth in each arch. Intersecting angles, the widths of the lateral and central incisors and the arch width measured on the scaled images of the unknown models. The images were analyzed independently by two investigators. Their measurements were then statistically compared to an established population data set of 469 males, ages 18 to 44 years. Statistical analysis was achieved using two models; Pearson's correlations and distance metric analysis. Pearson's correlation results based on width only, angle only and widths plus angles were reported by each investigator. Angles measured along with widths and compared to the known data set ranked each set of models from 1 to 469 with a ranking of one showing the lowest p values. Investigator #1 ranked 5 out of 143 images as number 1, 10 out of 143 in the top 1%, 34 out of 143 in the top 5% and 59 out of 143 in the top 10 %. Investigator #2 ranked 2 out of 156 as number 1, 13 out of 156 in the top 1%, 36 out of 156 in the top 5% and 54 out of 156 in the top 10%. The second statistical model using distance metric analysis had a sample count of 102 images with 3 out of 102 within 1% of the population, 16 out of 102 within 5% of the population and 23 out of 102 within 10% of the population when evaluating the results of the upper jaw only from investigator #1. The concept of using an incisal line is based on geometric principles of line segments and the angles they form when extended. The use of this concept will aid the crime laboratory imaging specialist and forensic odontologist in their analysis of bite marks (patterned injuries). 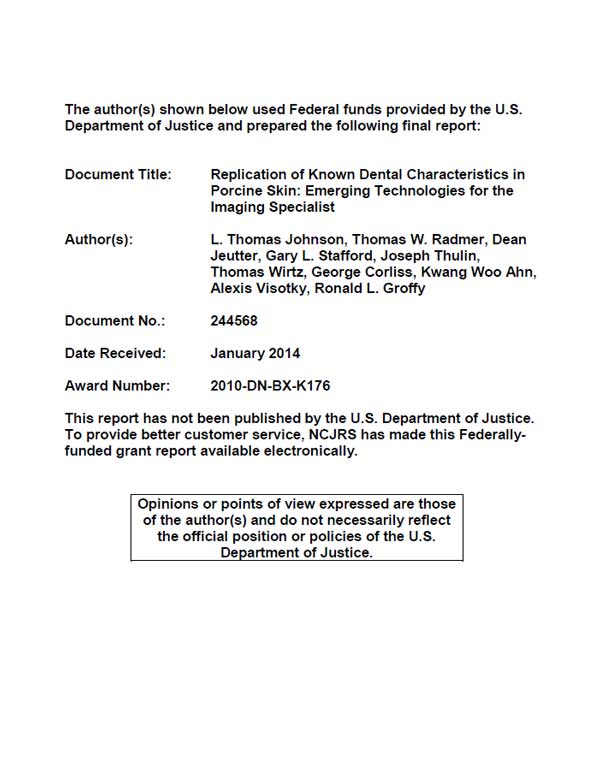