This reference guide addresses technical issues that arise in considering the admissibility of and weight to be accorded analyses of forensic samples of deoxyribonucleic acid (DNA). We address only the best-established form of forensic DNA identification analysis, known as restriction fragment length polymorphism (RFLP) analysis. Scientific knowledge in this area is evolving rapidly, and analytical techniques based on different principles are being developed. Technologies based on the polymerase chain reaction (PCR) technique of DNA amplification may become the dominant modes of analysis in the relatively near future. PCR-based analysis techniques are discussed briefly in section IV.A.

In this guide we set forth an analytical framework judges can use when DNA identification evidence is offered by expert witnesses. Therefore we describe only the basic principles of the technique; we do not address the general expert witness qualification matters raised by Federal Rule of Evidence 702 or procedural issues such as discovery. Although we cite both state and federal cases for illustrative purposes, this reference guide is not intended as a guide to the status of DNA evidence in any particular jurisdiction.

DNA analysis is based on well-established principles of the wide genetic variability among humans and the presumed uniqueness of an individual’s genetic makeup (identical twins excepted). Laboratory techniques for isolating and observing the DNA of human chromosomes have long been used in nonforensic scientific settings. The forensic application of the technique involves comparing a known DNA sample obtained from a suspect with a DNA sample obtained from the crime scene, and often with one obtained from the victim. Such analyses typically are offered to support or refute the claim that a criminal suspect contributed a biological specimen (e.g., semen or blood) collected at a crime scene. For example, an analyst may testify on the basis of a report that includes the following:

Deoxyribonucleic acid (DNA) profiles for [the specific sites tested] were developed from specimens obtained from the crime scene, from the victim, and from the suspect. Based on these results, the DNA profiles from the crime scene match those of the suspect. The probability of selecting at random from the population an unrelated individual having a DNA profile matching the suspect’s is approximately 1 in 200,000 in Blacks, 1 in 200,000 in Whites, and 1 in 100,000 in Hispanics.

An objection to this sort of testimony usually comes before the court when the defense moves to exclude the testimony and the report. Such a motion can be made before or during trial, depending on circumstances and the court’s rules regarding in limine motions. Before the Supreme Court’s decision in Daubert v. Merrell Dow Pharmaceuticals, Inc., such disputes often were aired in hearings devoted to determining whether the theory and techniques of DNA identification were generally accepted by the relevant scientific community and so satisfied the Frye standard. Since Daubert, general acceptance remains an issue but only one of several a court may consider when DNA evidence is offered. Frequently disputed issues include the validity of applying the standard RFLP technique to crime samples, the proper interpretation of test results as showing a match, and the appropriate statistical determination of the probability of a coincidental match.

To address concerns that had been raised regarding the use of DNA identification evidence in forensic contexts, the National Research Council (NRC) of the National Academy of Sciences convened a committee of scientists, forensic scientists working in law enforcement, and legal scholars. The committee’s report offers conclusions about the scientific validity and reliability of DNA analysis and makes recommendations concerning its use as evidence in court. The report, which recommends that courts take judicial notice of both the theory underlying DNA analysis and the ability of the most commonly used method of testing to distinguish reliably between different sources of DNA, confirmed the conclusion several courts had reached. However, the committee also recognized actual and potential problems with the use of current DNA identification methods and recommended steps by which the scientific and forensic communities could address them. Throughout this guide, we cite, where appropriate, the NRC committee’s position on issues still in dispute, but such citation should not be taken as endorsement of the committee’s conclusions.


A. Is the Scientific Theory Underlying RFLP Valid?
B. Are the Laboratory Techniques Used in RFLP Analysis Valid and Reliable?
C. With Respect to Disputed Issues, What Are the Relevant Scientific Communities?


V. Laboratory Performance of the RFLP Analysis Offered as Evidence


A. Has the Testing Laboratory Demonstrated a Record of Proficiency and Quality Control Sufficient to Permit Confidence That the Tests Were Conducted Properly?


B. Was the Crime Sample in This Case Handled Properly?


C. Was the RFLP Analysis in This Case Conducted Properly?


A. Does the DNA Profile from the Crime Sample Appear to Be Consistent with the DNA Profile of the Suspect?
B. What Measurement Standard Was Used to Determine That the Bands Are Similar Enough to Declare a Match?


VII. Estimation of the Probability That the DNA Profiles Match by Coincidence


C. What Is the Relevant Comparison Population for Estimating the Probability of a Coincidental Allelic Match? 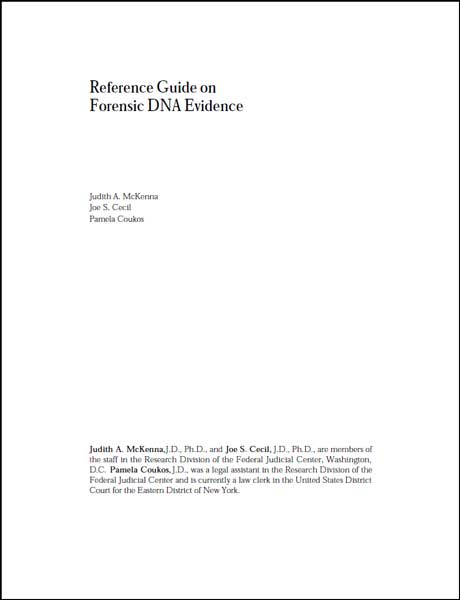