Photographs taken at the scene of a traffic accident are a most critical part of the investigation. Most law enforcement investigators are familiar with the term: "...a true and accurate depiction of the scene..." It is important that law enforcement personnel assigned the task of photographing traffic accidents understand more than just the basics of camera operations and film exposure, so that photographs taken will truly represent the scene as it was at the time of the investigation. It will be the purpose of this article to address many of the problems facing the law enforcement photographer at the scene of a nighttime traffic accident or crime scene. Since this article will deal with the specific technique of painting with light, a basic knowledge of camera operations and accessory functions is necessary.

Olympic competitors are confronted with difficulty factors as they perform their gymnastic and diving exercises. It could probably be argued that most novice swimmers could stand at the edge of a three meter board and complete a simple dive into the pool with some degree of grace. The same can be said for the beginning photography student. Simple photographic situations such as those during the daytime with a bright sun and high sky are easily mastered. It's when a factor such as steady rain, heavy snow, a bright sun low on the horizon, or nighttime is encountered that the photographer is truly put to test. My experience has found that the nighttime traffic accident is one of the more challenging scenes to photograph, particularly when skidmarks and/or other evidence is scattered over a great distance. Simply put, the camera does not see what you see. Have you every stood outside under the stars and noticed that, up to a certain point, you tend to see more clearly as time passes? Your camera cannot do this. The adjustments you as the photographer make in such things as camera position, time of exposure, and supplemental lighting will be the deciding elements as to whether your camera allows the film to "see" as you do.

The key to any law enforcement investigation is to be prepared, and photography is no different. Preparedness includes necessary training, but the classroom needs to be followed with equipping the student with the proper tools. For this reason, the following items are suggested as essential to any camera kit, and in particularly, one to be used for nighttime accident work. The function of each item, and reasons for being crucial in nighttime accident photography will be discussed in detail.


Learning by Trial and Error

The process involved in painting with light is easily mastered with proper preparedness and practice. You wouldn't wait until the day on which you are encountered with a string of safe burglaries at mall stores to learn proper latent fingerprint techniques would you? If sometime in the future you may be called upon to take nighttime accident of crime scene pictures, now is the time to prepare yourself for the task by realizing the special considerations which will be encountered. It has already been mentioned in this article that the camera does not see what your eyes can. You, as the photographer, need to help the camera to see by supplementing existing light at the nighttime scene with artificial lighting, an extended time exposure, or a combination of both.

In classes which I teach at the Hawkeye Community College I assign students to take a number of photographs as they study the section on Painting with Light. One of the first photos taken is done in an outdoor setting of a subject matter fifty feet away from the camera position with a shutter speed of 1/125th second and an f/stop of f/8. The student has the option to have street lights or other existing light present in the area. When these initial photographs are viewed, many of the students comment that they could easily see the subject matter which they were photographing when the picture was taken, but that it was not visible in the print. If the subject matter was an automobile, they were possibly able to see light reflecting off a license plate in the print, but the car itself was lost in the dark background. What a perfect illustration of the point I'd been trying to make to them! A follow-up photo in the assignment would be to take a picture from the same location, looking at the same subject matter, using the same camera settings, and illuminating the scene with one flash from any flash unit they may have brought to class with them. The finished photos were again, usually very dark, with the subject matter considerably underexposed. Some of the students were sometimes heard commenting that they thought their flash was good for up to a distance of fifty feet. The point made here was two-fold. Again, it may appear that as they took the picture the scene was illuminated with the single flash. This is not always the case, as again the eyes of the photographer were more sensitive to the flash going off than was the camera and film. Secondly, the photographer should never assume that just because the flash may have an automatic or manual range up to fifty feet, proper exposure of subject matter at that distance will be obtained. I live by the rule that I should assume proper flash exposure at two-thirds the distance as indicated or suggested by the manufactures specifications. I've argued this many times with other photographers, but again - it's something that seems to work well for me.

It is often only after the student has seen photographs taken such as those described in the previous section that they realize nighttime photography poses many problems they may not have encountered in previous photographic situations. Since it will impossible to conduct a mock accident scene as I would during a class, the following is an accident scenario which will be supplemented with two photographs. 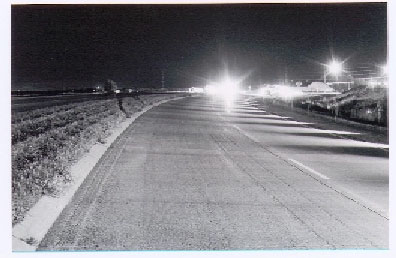 I began my duties by taking a number of close-up pictures of the two vehicles, their damage and evidence strewn about the scene. These initial photographs were taken with 400 speed color film (I prefer AGFA Optima.) After the deceased and injured were removed and the scene was secure I began the task of taking photos from considerable distances, showing the approach both vehicles had as they came upon the scene. One of the photos was shot from approximately 500 feet north of the accident scene. I wanted to illustrate in this photo the tire tracks from the southbound vehicle as it crossed the median and entered the northbound lanes of travel. I obtained the photo in the following manner:


The importance of starting the process of "painting" at a point furthest from the camera and walking back to the camera position while firing flashes cannot be stressed enough. Many people ask why, if a flash illuminates the scene several times on each frame of film, there are not an equal number of images of the photographer in the finished print. The answer is simple if the technique was done correctly. By beginning at the furthest point from the camera and firing repeated flashes walking back toward the camera, each subsequent flash "covers up" the image of the photographer during the previous flash.

The photo which you see is not the only picture I took at the scene using the painting with light technique, and in fact is not the only one I took from this particular camera position. The point here is that several shots need to be taken in order to be certain that good pictures are obtained. Setting up the tripod, stopping traffic, and eliminating unnecessary movement in the view of the camera is the difficult part. Why not take a few extra minutes at the scene and take a few more time exposures while exposing the scene with a varied number of flashes from different angles? 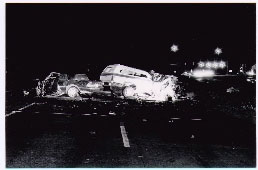 An additional photo taken at this scene illustrated the slight curve in the road for northbound traffic.

This photograph was taken to show the final resting positions of the vehicles, the view for northbound traffic, and the absence of roadway obstructions and/or skidmarks. Painting with light works well when taking photos at this range. "Background noise" such as street lights and traffic lights is usually less than what is encountered in long-range shots. Many of the difficulty factors encountered in mid-range painting photography are controllable. For one thing, there is less chance of moving traffic in the background interfering with the photography. In addition, pedestrians are easily controlled with as few as one additional Officer, and harsh background lighting (street lights) is less evident. Finally, the photograph takes less time from start to finish as the number of flashes used is less and considerably less walking around within the scene is necessary. A second example of a mid-range photo using the paining technique is shown. 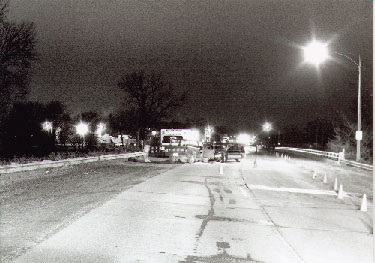 This accident clearly indicated the lack of skidmarks on a dry pavement at the scene. Only one street light (right - foreground) caused me difficulty while composing the shot, and traffic control was easy as the scene was a two-lane lightly traveled road. This scene was a perfect chance to practice the technique and at the same time obtain photos not possible with conventional flash photography.

I've been around law enforcement long enough to believe that nothing in this line of work will intimidate me so much that I would be afraid to try it during an actual investigation. Anyone can sit in a classroom and look at some slides which illustrate a technique being explained by the instructor. It takes dedication to apply skills learned during practice in order that they are performed as routine "in the field." I encourage each and every one of you to take the time to familiarize yourself with the technical aspects of your job ahead of time.


Article submitted by the author.