A sensor technology first developed for medical use is being adapted to detect and visualize destroyed serial numbers in firearms.

In the firearms section of the Johnson County Sheriff’s Office Criminalistics Laboratory, located southwest of Kansas City, Kansas, firearms expert Jason Butell has spent many hours over the past two years destroying serial numbers on firearms and then trying to recover and read them. His work is key to an NIJsupported research project to determine whether a new system that combines magnetic fields, polarized light and a special sensor is better than the traditional methods for recovering and reading obliterated serial numbers.

Thus far, Butell is pleased by what he sees. The new method uses magneto-optical (MO) sensor technology to nondestructively detect and visualize serial numbers that have been scratched, ground, chiseled or otherwise removed from firearms. Although the new system isn’t perfect, compared with the nondestructive method currently used in most crime laboratories — magnetic particle inspection (MPI) — MO sensor technology, according to Butell, “[is] slightly more sensitive, sees a little deeper, is not as messy and requires a little less work.”

Butell collaborates with Rudi Luyendijk of the Midwest Forensics Resource Center, part of the Department of Energy’s Ames Laboratory in Ames, Iowa. Luyendijk, the principal investigator who began the MO project in 2011, has completed the first phase of research — testing the sensors on flat, smooth surfaces — and is now testing some of the 2,000 firearms in the Johnson County crime laboratory’s reference library. 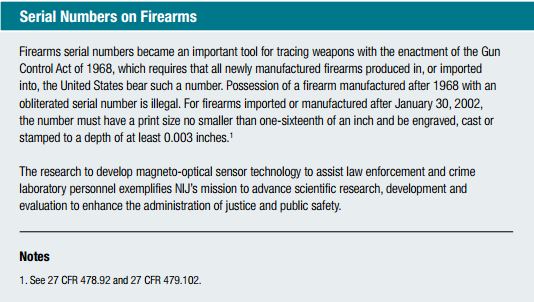 “We’re currently doing phase two testing that is evaluating the use of the MO sensor on realistic samples, meaning firearms [recovered by law enforcement] on which the serial numbers have been obliterated,” Luyendijk said. “We tried out this method on ideal test samples and saw that it had great potential for firearms that are made of magnetic materials,” he explained, “so we moved to testing on actual firearms [recovered in criminal investigations].”

Both the MO sensor technology and the standard MPI methods use strong magnetic fields to reveal obliterated numbers, which requires that the firearms be magnetic. To reveal destroyed serial numbers on weapons made of nonmagnetic materials, such as zinc, aluminum or alloy substances, crime laboratories must still use chemical etching, a process that uses strong acids and typically reveals a serial number for only a few moments before possibly destroying it.

Whether it be MO, MPI or chemical etching, an obliterated serial number can often be recovered from a metal weapon because when a manufacturer stamps the serial number into the barrel or frame, the crystalline structure of the metal below the number is deformed and compacted. Because of the structural changes in the underlying metal, even when the visible serial number is filed or ground away, the material structure below retains the number.

The MO system “is more sensitive than any of the current methods for detecting serial numbers,” Luyendijk said. It also can measure deeper than the grinding or scraping typically done to remove the numbers from firearms found on the street, he explained.

Using MO imaging on firearms is new, but the imaging system itself is not. It was developed for the medical imaging field, Luyendijk said, where it is used to determine how drugs (tagged with magnetic particles) disperse through a person’s body. The system is also used in the aircraft industry to search for small cracks in older airframes.

Revealing a visually unreadable serial number with MO sensor technology, he said, is straightforward and quick. Strong magnets are held against a firearm, and a waferlike sensor that includes MO and mirrored layers is placed directly over an obliterated serial number. Polarized light is passed through the sensor and — based on what is known as the Faraday effect — reflected off the surface, where the magnetic properties cause the polarization of the light to rotate due to the differences in the crystalline structure where the serial number was applied. The reflected image is viewed through an analyzer, which is just another polarized filter. In essence, it’s visualizing the magnetic field that is disrupted by the differences in the metal properties created by the application of a serial number.

“It’s an image you can look at directly and in real time,” Luyendijk said. “That’s the beauty of it. It is nondestructive, and you’re not changing anything about the firearm. You could do it over and over again, and you could take it to court if you plan to do a demonstration.”

During phase one testing, Luyendijk was concerned about cost. The sensor was mounted in an industrystandard viewing system that was priced at about $15,000. In addition, each of the multilayered sensors cost about $2,200, and they were not very durable. The system, mounted in a box, also could not read serial numbers on curved surfaces or hard-to-reach areas, such as the barrel or handle of a handgun.

During phase two testing, Luyendijk and Butell discovered that they could lay a sensor directly on a firearm and avoid the expensive viewing system. Butell also discovered that he could use fragments of broken sensors as long as they were big enough to cover an obliterated area.

“We’re using the broken parts from the manufacturer,” Butell said of his efforts to lower the costs. The sensor fragments, donated by the German company Matesy GmbH through the U.S. distributor Absolute Magnetic Measurements & Solutions, “are the carpet remnants of sensor manufacturing, the fragments they normally would throw out.”

Butell’s goal is to keep the costs low and the process simple so that it can be widely used in crime laboratories. “You can do this with a table lamp as your light source,” he said. The manufacturer has hardened the coating on the sensors so they don’t scratch as easily, he said, and the costs for the sensor fragments are less than $1,000. That makes the MO sensor method comparable in cost to the MPI system, Luyendijk stated.

Butell’s goal is to add the MO method to the tools he already has to recover obliterated serial numbers. Acid etching will remain necessary for nonmagnetic firearms, he said, and MPI is a tried-and-true process that works well on many firearms. But the added sensitivity and ease of use of MO sensor technology make it a process that he would like to see available to all crime laboratories.

“The best case is we have all of these at our disposal,” Butell concluded.

Luyendijk said he is gathering the final data on the phase two work and intends to publish a final report within several months.


The Crime Scene Investigator Network gratefully acknowledges the U.S. Department of Justice, Office of Justice Programs, National Institute of Justice, for allowing us to reproduce, in part or in whole, the article Magneto-Optical Sensors Bring Obliterated Serial Numbers Back to Life. The opinions, findings, and conclusions or recommendations expressed in this video are those of the author and do not necessarily represent the official position or policies of the U.S. Department of Justice.