A Washington State Patrol officer is making it even better

Rod Green has been doing accident and crime scene reconstructions for 14 years. In addition to collecting and analyzing information, Green is working to improve the reconstruction process on-scene and in the office. His work is drawing attention in Washington and surrounding states.

A 21-year veteran with the Washington State Patrol (WSP), Green is using his experience and knowledge to simplify and speed the work in collecting and analyzing information and evidence at accidents and crime scenes. Green's blend of high-tech hardware and software tools together with common sense approaches has produced measureable improvements in scene reconstruction.

Like many law enforcement agencies, WSP has adopted laser scanning as a tool for scene measurement and documentation; Green has spearheaded the move. He has worked on every aspect of scene reconstruction, from data collection and processing to the production of drawings. But, for Green and others, the technology takes a back seat to the core mission of public safety and law enforcement. "I'm not so concerned with how pretty the point cloud looks as I am with getting the details-all of the details-to accurately gather measurements of the scene for reconstruction," Green said.

Green believes that laser scanners' ability to gather vast amounts of information can play an important part in producing reports, drawings and exhibits that contribute to the successful resolution or prosecution of a case. But for scanners to become mainstream tools, they must seamlessly blend into the work of people who are already very, very busy.

On-scene investigators at fatal collisions and crime scenes face a variety of challenges. They must collect comprehensive information in an accurate, systematic manner. Often working at night or in bad weather, investigators need to capture data quickly while the scene is fresh and before rain or snow can cause evidence to erode or wash away.

Speed is also essential to reduce the duration of road or lane closures, which are costly and inconvenient to the public. According to a 2015 report by the National Highway Transportation Safety Administration (NHTSA), costs attributed to congestion caused by fatal crashes in 2010 including travel delay, excess fuel consumption, greenhouse gases and pollutants totaled $189 million. On average, a fatal collision resulted in a closure of nearly 3.75 hours. By using laser scanners for data collection, Green and his WSP colleagues demonstrated that they could reduce the time on site while significantly increasing the quality and quantity of information they gather.

Collision investigators must also guard their own safety. In many incidents, they are working near traffic or other hazards. Other measurement methods such as total stations and baseline-and-offset techniques may require several people to capture and record the data and can result in closing more lanes. Total station measurement often requires someone else at the site to hold the prism rod; that person could be working on some other aspect of the investigation.

Green knows of some jurisdictions that have closed busy street or arterial for 6 hours or more to accommodate measurements with a total station. In contrast, a laser scanner, which operates autonomously, can reduce the time and number of people needed for measurement and documentation while also lessening exposure to traffic.

It's not just the work in the field. In addition to on-scene measurements, reconstructors must also manage and process the data to produce the information needed by investigators and district attorneys. They need to focus on the pertinent details while maintaining data integrity and the chain of evidence. Their finished products are exhibits, reports and analyses that provide the basis for the accurate depiction of the scene and events. Green has developed a combination of hardware, field procedures, software and data management that reduces time on site and yields greater depth of detail throughout an investigation.

To some degree, scanners have been utilized in scene reconstruction for nearly 20 years. A scanner uses laser technology to collect a large number of closely-spaced measurements and produce a "point cloud" of 3D points. By setting the scanner in several locations around a scene, investigators can capture multiple point clouds to develop a 3D snapshot of the location. Even small or subtle features such as shell casings or tire marks can be captured using the scanner and point cloud.

After the on-scene work is complete, the scan data is transferred to office computers for archival and processing. The multiple scans are combined into a single point cloud, which provides a complete view of the scene.

But large point clouds come with their own challenges. "There are people who look at a point cloud and say they can't see the details," Green said. "That is usually because it wasn't scanned or processed correctly. We want to avoid the trap of not seeing the evidence for the cloud. We do not want just a huge cloud; we want better management of the cloud." The solution comes from integrating the processes from collection through to final reports.

That integration begins in the field, where WSP uses a Trimble TX5 scanner. The scanner simplifies the work for scene investigators by providing preset scanning modes that capture data at different levels of resolution. Similar to preset modes on a digital camera, users can select the scanning mode to fit the detail needed at each setup on the site. Green has developed guidelines for WSP investigators that suggest which mode is appropriate for capturing different types of details and evidence. "We like the presets," he said, "because we can teach our people what mode to use in a given situation without having to calculate resolution." Scanning at higher resolution requires a bit more time but can capture small details. "I might need to capture shell casings or faint tire marks; for that we might scan at high-resolutions," Green explained. "But for other setups we can run at lower resolution, which is much faster. We can gain a lot more detail much faster, by as much as 2/3rds than with other scanners."

When data from the scanner arrives in the office, detectives use Trimble RealWorks software to combine the scans and begin analyzing the scenes. The software can use "plane-based" and "cloud to cloud" registration to merge multiple scans-the technique helps reduce the need for on-scene investigators to handle the spherical targets commonly used in many scanning projects. Although target spheres are needed in some situations, Green said the plane-based and cloud to cloud approach is much simpler and faster for field investigators-so much so, it's become the default method.

Eliminating the targets is just one way the software component of the integrated system helps make the job of on-site personnel and office faster and easier. For example, even when working at low resolution the scanner may collect thousands of points on a road- far more than needed to correctly depict the surface. The software can reduce the density of the points to preserve the accuracy of the information while eliminating clutter that could potentially distract or confuse a jury.

According to Green, the main advantage of RealWorks is the cleaning of unneeded points. Because troopers need to work within the scene and traffic during scanning, they are sometimes measured by the scanner resulting in superfluous or "parasite" points. The software's Auto Classification function can place designated objects (ground, poles, vegetation, buildings) into designated layers and also remove the parasite measurements from the finished point cloud. The feature allows for quick processing to finalize the cloud by removing all unneeded measured points.

With the main point cloud in place, the office work moves to the phase of creating reports and diagrams. Using EdgeFX reconstruction software, Green can create drafted maps and models in 3D. Points that are superfluous or irrelevant to the case can be moved to separate layers that are switched off, but are still preserved to meet the essential chain of evidence requirement while and maintain integrity of the scene's data. When the point clouds are completed, the clouds and analyses can be supplied to prosecution teams. RealWorks includes simple viewing software that enables attorneys to view and "walk through" a point cloud to gain a detailed understanding of a scene.

The reconstruction software enables Green to add evidence markers, vehicle models, trajectories and more-it can even simulate how cars are crushed in a collision. The information can be used to produce diagrams and animations for courtroom presentations or can be sent to other systems for specialized analysis. The end result is a concise representation of the scene and events-all backed by detailed, defensible data.

The speed of the scanning system can be illustrated through Green's experiences. He described a recent murder investigation in which a local jurisdiction had mapped the crime scene-a series of trails leading from a trailer park to a swamp. Using a total station, it took three people to do the work. The team needed roughly six hours and required five setups of the total station. They captured a total of 600-700 points just to produce the drawing. To demonstrate the power of scanning, they repeated the mapping using the TX5 scanner. The work in the field required only 75 minutes and captured the same trails. With millions of points instead of a simple drawing, the team produced a full 3D point cloud ready for drafting that contained far greater detail than the total station work.

At a second location, officers investigated a vehicle collision that also included a shooting. Although capturing the complicated scene required 31 separate scan setups, Green estimated the scanning was completed in less than two hours. When the scan data arrived in the office, he needed only six hours to perform the registration, cleanup and drafting. Depending on the review process, Green said that the entire timeline to produce a full report could be less than two days.

One of scanning's most valuable features is the ability to preserve a scene while it is fresh and enable personnel to revisit the scene "virtually" after the fact. For example, an object not deemed pertinent early in an investigation may turn out to be important. By using the point cloud, investigators can return to the virtual scene at any time. They can use the virtual return visits to extract or confirm details on the object and its location long after the on-scene events and investigation.

The key to Green's success lies in his understanding of what goes on at the scene and beyond. By using a holistic approach to reconstruction data collection and analysis, Green is helping to simplify the work of officers in the field and office alike. His work is enabling investigators to complete their work faster, more safely and with better results. 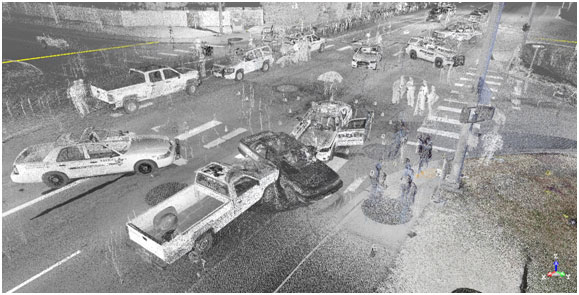 A point cloud of a collision scene. Parasite images of troopers are caused
as personnel moved through the scene during scanning. 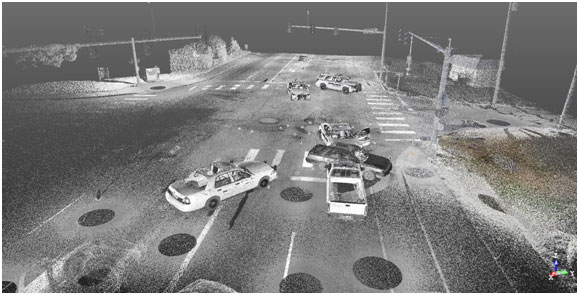 After parasite points are removed, investigators can focus on pertinent information.
The removed points are kept in a layer that can be switched off. 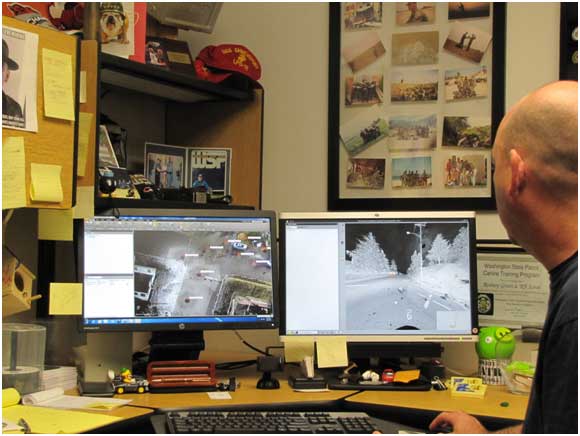 WSP Trooper Rod Green inspects multiple views of point cloud captured at a collision scene.
The point cloud can be used for analysis, modeling and animation to recreate the collision.