How Far Will Shooting Distance Determination Take Your Case?


During the course of a shooting investigation, there may be at least two issues to consider: Who shot the firearm? How far was the shooter from the victim when the shot was fired? The answers to these questions actually involve the analysis from two separate lab disciplines. To determine who may have shot the firearm, the Trace section performs gunshot residue (GSR) analysis. To figure out how far the shooter may have been from the victim, the Firearms section performs shooting distance determination. These examinations appear to be related, which often leads to confusion for our submitting agencies when requesting exams from shooting cases. A previous article for GSR analysis (see Under The Scope, Vol. 8, No. 1) in conjunction with this article on distance determination should provide clarity to assist you in deciding which exams are necessary for your case.

Shooting distance determinations are performed in an attempt to approximate firearm muzzle-to-target distance (range) at the time of a suspect firearm being discharged. Distance determinations are possible because burnt and unburnt gunpowder particles, along with the bullet, are discharged from the muzzle, which then impact clothing or other items. Single or multiple projectile firearm residues may leave a pattern on a victim’s outermost garment or another contact surface, such as a wall. Clothing, and other surfaces, may be analyzed to ascertain an approximate muzzle-to-target range. In theory, the closer a discharged firearm is to an object, the smaller its gunpowder pattern will be; likewise, the more distant, the larger the gunpowder pattern. Many firearms' gunpowder patterns (or gunpowder particles that impact a target) drop off substantially at approximately 36”-48”.

Visual examinations, along with microscopic and chemical examinations, are conducted on a questioned bullet hole and its surrounding area to obtain a pattern for analysis. The suspect firearm and suspect ammunition are test fired into similar target material (witness panels) at varying ranges to obtain known standard tests for comparisons.

These known test standards are then analyzed in the same way as the questioned bullet hole. An approximate distance range may be determined when the questioned pattern is compared to the test patterns. 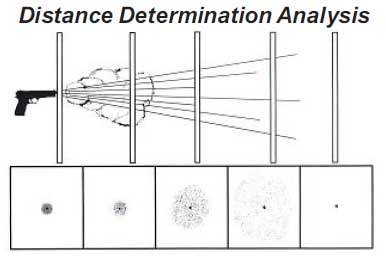 A hole in a garment or object can be chemically processed for the presence of lead and copper residues, which may be indicative of a bullet passage. A ring of residue wiped from the surface of the bullet (bullet wipe) as it passes through material is common around the immediate perimeter of a bullet's entrance. The ring appears very dark on lighter materials. 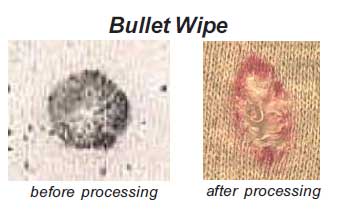 When a firearm is discharged at a close distance, or in contact with, a garment, telltale physical characteristics may be present, which include melting of the entrance hole's immediate perimeter, an obvious soot or vaporous “cloud” on the outer perimeter, and/or a very irregular hole.

Not only can single projectile firearms be examined for shooting distance determination, but multiple projectiles (such as from a shotgun) can be examined, as well. When a shotgun is alleged to have been used, the pellet spread (multiple projectiles) pattern on an object or a victim’s outermost garment may be examined to determine an approximate muzzle-to-target distance. A mass of shot can begin to spread at approximately 9'-10', and individual pellets (flyers) may break off from the main mass. Shot pattern determination depends on a shotgun's barrel configuration and choke as well as the type of shotshell and it components: shot size, number of pellets, and wadding. In theory, the closer a shotgun is discharged to an object, the smaller its pellet pattern will be; the more distant, the larger the pellet pattern. 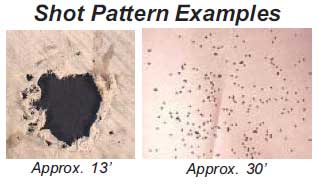 Regardless of a pistol, revolver, or shotgun, the lab must have the victim’s outermost garment, the actual suspect firearm (not a similar one), and the same or similar ammunition as that which allegedly was used to shoot the victim.

Several factors may limit the quality of the examination process, or preclude it altogether: extreme blood saturation of a garment or object, improper handling and packaging, the lack of similar ammunition as that used in a specific shooting, and/or the lack of the actual involved firearm. Blood soaked or wet clothing must be dried and then packaged by itself prior to lab submittal.

Gunpowder patterns or “stippling” on human tissue must be examined and interpreted by a qualified medical examiner. The lab can aid this process by test firing the suspect firearm and ammunition into witness panels at various ranges, which may then be forwarded to the attending medical examiner for comparisons to a questioned gunpowder pattern on a shooting victim.

GSR and Shooting Distance Determination are two different types of analysis performed in the lab by two different sections. By having read the previous GSR article and this one on distance determination, you now know that these two exams differ in how they can assist your investigation. It is imperative that you accurately distinguish and request the specific exam(s) to be performed at the time you submit the evidence.

The MSHP Lab System has two labs offering full Firearms and Trace services (including distance determination for Firearms and GSR for Trace): General HQ Lab in Jefferson City at 573-526-6134 and Troop D Lab in Springfield at 417-868-9400.