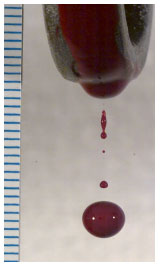 Working on the premise that an understanding of the dynamics of a bloodletting event is critical to the sound interpretation of the resultant bloodstain pattern, a set of over 500 individual high speed digital video clips of common bloodletting mechanisms has been assembled. These include single blood drop formation, impact spatter, gunshot spatter, expiration, cast-off, projected and contact blood staining. These video sequences were evaluated to better understand the basic dynamics of bloodletting events. This set of high speed video sequences is available for distribution to the forensic science community via the Midwest Forensics Resource Center (MFRC) website. It is hoped that the outcome will be a significant contribution to the strengthening of the science underpinning bloodstain pattern analysis.

The study of bloodstain patterns is essentially a study of the aftermath of a blood transfer event. Bloodstains form on two-dimensional surfaces and from their size, shape and distribution, inferences can be drawn as to the mechanism that gave rise to their formation.

The blood patterns that form from such events often have recognizable characteristics that permit them to be classified into pattern types. It follows then that with a suitable understanding of these characteristics, investigators can draw certain inferences about the events and the mechanisms that led to the formation of the pattern.

However, a bloodletting incident is often a complex set of events which take place in three dimensional space. Blood volumes which are transferred generally undergo some change prior to their subsequent deposition on a surface. For example, a pool of blood is broken up into droplets of varying size which are projected outwards when the volume is subjected to an impact force. It is our contention that an understanding of the dynamics of these changes is critical to the sound interpretation of the resultant bloodstain pattern.

To date, investigators have mainly relied on observing many such patterns, coupled with laboratory simulation experiments, to build up experience in the recognition and classification of bloodstain patterns. Relatively little however, has been documented about the dynamics of the blood transfer event.

Typically, individual transfer events take place over a very short period of time. This, combined with the often very small size of transferring droplets (which could be spheres of less than 1 millimetre diameter), mean that simple visual observation or standard photography of the event is insufficient.

Some work has been done with high-speed film cameras,1,2,3 regular video4 and stroboscopic lighting.5 One of these,1 which until recently was the benchmark for such studies, used a film camera at 4000 frames per second. Although this was a definitive study, it was not an attempt to systematically document the major blood transfer events.

The fact that little in the way of photographic information has been produced since, reflects in part the fact that high speed film cameras are cumbersome to use, require significant lighting, are expensive to run and lack flexibility. With the advent of digital cameras, the photographic world has been redefined. Now, high-speed digital video cameras are available with impressive speeds and resolution. The options for data analysis are extensive and the data capture process is relatively straightforward.

In short, the door was open for a systematic study of blood transfer events in a way that has not been achieved to date. This project aimed to take the first steps in the task of studying and documenting the three dimensional dynamics of the major blood transfer events. It is hoped that this will lead in turn to a new understanding of even the most common bloodstain patterns encountered by crime scene investigators the world over. It was also anticipated that some hitherto unknown aspects of blood transfer will surface and invite on-going investigation.

The specific objectives chosen for the project were:

These events were to include but not be limited to:

2. To compile a set of video clips of common blood transfer events that can be used by instructors in a bloodstain pattern course

A series of experiments was designed to meet these project objectives. These were based on the experiments typically performed by students in a basic bloodstain pattern analysis course. It was anticipated that this approach would yield the most valuable output in terms of teaching aids for instructors of this type of course.

Filming for this project was primarily done at the Minnesota Bureau of Criminal Apprehension (BCA) Forensic Science Laboratory in the USA. Some additional experimental work was completed at the Christchurch laboratory of the Institute of Environmental Science and Research (ESR), New Zealand.6 Work on the project commenced in early October 2007. The early part of the project time was spent on setting up and testing the camera and its associated software, organizing laboratory work space and acquiring consumables and associated equipment required for the experiments.

As anticipated, lighting was a critical issue. Two theatre lights were rented to supplement the available lighting equipment. The resulting setup was adequate for most experimental needs but will need improving for future work where resolution of very small particles is required. The setup for each experiment involved various techniques to maximise available light, provide high contrast images and where possible calibrate the scale of the experiment.

Each experiment was assigned a unique number sequence that reflected in part the conditions of the experiment. The first number in the sequence was the section number of the relevant section of the Laber and Epstein BPA laboratory manual.7 For each experiment, video sequences were captured and stored on computer and backed-up on portable hard drives. Bloodstain patterns created on targets used in each experiment were collected and preserved. This was done to provide opportunities to make the vital link between the mechanism of the events videoed and the characteristics of the resulting patterns. Where possible, two to three replicates of each experiment were performed.

Human blood was drawn from laboratory donors, mixed with an anti-coagulant and used within 72 hours for all the experimentation. Blood was stored refrigerated when not in use and warmed to room temperature during use. A wide range of target surfaces such as cardboard, building materials, carpet and various types of clothing were used for the deposition of blood and blood spatter. Experiments were set up using standard laboratory equipment as well as some specially built devices for producing and capturing blood spattered by different mechanisms.

The camera used was a Photron Fastcam-SA1 High Speed Digital Video (HSDV) camera. Lighting was achieved with the aid of two ellipsoid beam theatre lights with 750 Watt tungsten lamps and, where necessary, two additional 1000Watt non-focused quartz halogen light sources. Regular Nikon lenses were attached to the camera, with most video captured using either a Tamron 90 mm macro lens or Micro Nikkor 55 mm or 105 mm lenses. Apertures between f4 and f11 were used depending on available light at the shutter speed chosen to minimise motion blur. Some experiments were conducted under an Olympus stereo microscope model SZH with C-mount camera adaptor and focusing dual fiber-optic illuminators.

Most of the blood events studied were highly complex and variable. Therefore, the collection of video sequences, at best, only represents a set of examples of the events in question. Nevertheless, there was much in these sequences that provided valuable data on the mechanism of blood events. Over 500 video sequences were collected. These represented the following blood events:


AVI files using the Cinepak codec compression have been prepared from a representative set of video clips from the total collection. Examples from the video collections are presented below:

Passive drop formation - Formation of a drop on the handle end of a wrench:

Impact Spatter - Hammer striking a pool of blood on a hard surface:

Large Volume Projected Blood - Blood expelled from a syringe onto a horizontal target:

A wide selection of video clips from this project is available via a Midwest Forensics Resource Center web page. To download a video clip, use an Internet browser to navigate to http://www.mfrc.ameslab.gov/Research_projects.php and click on Video Analysis of Bloodstain Pattern Formation project. The file name of the clip gives the information about the experiment shown in that video.

Note from the CSI Network Webmaster

The videos referenced in this article are no longer available from the Midwest Forensics Resource Center web page. They can be viewed on the YouTube page https://www.youtube.com/user/CJCareers/videos

To use any video clip from the set available, first download the video to a local computer. The clip may be viewed by using either a media player such as Windows Media Player or the Photron viewer PFV 3.09. The PFV viewer software will enable a much more comprehensive set of tools for playing and analyzing the video clips including frame by frame control. The viewer can also be downloaded from the MFRC site. Instructions for using the PFV viewer are in the ‘Read Me’ file.

These clips are primarily designed to be of assistance to instructors of blood pattern courses. However, it is anticipated that researchers and caseworkers will also find them useful. They may be used for any presentation or project with the appropriate acknowledgement of their source.

This project offers two significant contributions to the practice of forensic science in the discipline of bloodstain pattern analysis.

Firstly, it has introduced, in a systematic way, the application of digital video technology to the study of bloodstain pattern formation. It is anticipated that this technology will take the science of BPA to a new level, by giving significant insight into the dynamics of the blood transfer event.

Secondly, it is reasonable to assume that the courts will continue to demand the highest standards of forensic evidence and scrutinise with even more thoroughness each and every method behind the opinion of an expert witness. BPA is a discipline that has relied heavily on the experience of the witness. It is anticipated that a closer scrutiny of the methods used in BPA will highlight the relative lack of underpinning scientific research and validation studies.

It is critical therefore, that the BPA community moves quickly to strengthen the discipline with sound basic research to underpin the testimony of the analyst and give the courts the confidence they need in this testimony. It is hoped that the results of this project will make a significant contribution to this.

This project was primarily supported by an NIJ grant from the Midwest Forensics Resource Center as well as CRI Capability Funds from the Institute of Environmental Science and Research, New Zealand, Ltd.

The authors would like to acknowledge the willing support offered by Dr. David Baldwin and Mr. Dan Zamzow, Ames University, Iowa.