Gun Shot Residue Testing:
Is it Still a Viable Form of Physical Evidence?


Gun Shot Residue, or simply GSR, is a means of testing for the presence of certain materials on the hands and clothing of a subject in hopes of determining that this individual may have discharged a firearm. The concept is an old one and dates back many years. Advances in testing technology make this examination much more specific than it was some 30-40 years ago.

The Chemistry of Gunpowder

Most historians agree that the ancient Chinese discovered what we refer to as gunpowder. During the 9th century Taoist monks (alchemists) searching for an elixir of immortality accidentally stumbled upon the basic formula for black powder—a mixture of saltpeter (potassium nitrate), charcoal and sulfur. Later versions of gunpowder contain these same basic ingredients, but the overall chemistry evolved to include modifications that produced “smokeless gunpowder,” Cordite, which eliminated the sulfur. Other advances added materials such as nitrocellulose (guncotton) and glycerol trinitrate (nitroglycerine).

Gunpowder—regardless of the formulation—has one specific purpose: the creation of oxides of carbon; in particular, carbon dioxide. The rapid creation of this gas is the propelling force that pushes a projectile (bullet) down through the barrel and on toward its intended target.

Gunshot residue contains burned particles (potassium nitrite) and some unburned particles (potassium nitrate), and for decades criminal investigators collected these particles by applying melted paraffin wax to a subject’s hands. Upon removal of the wax cast, a reagent containing diphenylamine and sulfuric acid was applied to the cast. The development of blue specks was indicative of the presence of nitrates.

But in the 1970s the courts took the position that the presence of nitrates in the environment was a common occurrence, and the dermal nitrate test was no longer a valid means to determine that the subject had fired a gun.

When a gun is fired, the gunshot residue particles - small particles produced during the gunpowder explosions - are emitted from the back of the weapon and the muzzle. These particles fly onto the skin and clothing of the person holding the gun. They contain elements that result from the propellant and primer decomposing, as well as from the bullet (which normally contains a large amount of lead), bullet coating or jacket, cartridge components, and previous residues in the barrel. Characteristic elements include antimony (Sb), lead (Pb), barium (Ba) and, for special types of ammunition, titanium (Ti), and Zinc (Zn). These cannot be completely removed by normal washing or cleaning, and samples of the particles can be taken from suspects with adhesive collection devices for further investigation.

More than 30 years ago scientists working in crime laboratories developed a different means of analyzing gunpowder residue. They turned to the components of the primers in most U.S.-made ammunition. The key ingredients sought were barium, antimony and lead. After the investigator swabbed the hands of the subject using a 5% solution of nitric acid, these swabs were submitted to the crime lab to be subjected to Atomic Absorption Analysis.

As the science improved a new, more reliable test method evolved: Scanning Electron Microscopy (SEM). Test samples for SEM are collected using contaminant-free adhesive tabs. The apparatus used in this test allows the examiner to actually see the microscopic samples collected, as well as gaining an analysis of the particles present.

“We have met the enemy and he is us.” Pogo

Cross contamination happens when GSR is introduced from a source other than the accused person firing a gun.

If the lab technicians find GSR, it can come from anywhere. Police take the view that if you haven’t just left the firing range, you fired the murder weapon. This argument holds great weight if you live in a society where guns are rare, such as Singapore or Japan. If you live in other places in the world, including the United States, that argument means nothing.

GSR lasts nearly forever. It can land on anything and stay there indefinitely. Because so many people in this country shoot guns and the things in their lives are covered with GSR, an individual will be covered with GSR when he or she comes in contact with these people or anything they touched. If tested, the individual will test positive for GSR. It is human nature to see what you want to see, and the police want to see that which will solve the crime.

"The ability to contaminate is the reason that there is such a limited degree of conclusions that can be made with gunshot residue," said Marc S. Taylor, a gunshot-residue expert from California who has testified nationally for both prosecutors and defense attorneys. They should never be making the statement that says gunshot residue shows that someone fired a gun."

Following a highly controversial case involving GSR internal Baltimore police documents show that contamination has been a recurring problem. Despite that and the prosecutors' review, the department continues to use gunshot residue in hundreds of cases each year. On the other hand, the FBI lab has discontinued offering GSR testing.

Special Agent Ann Todd, spokeswoman for the FBI Laboratory, said the change was communicated electronically to FBI field offices on March 15, 2006, though it has not been widely publicized.

Todd said the FBI stopped analyzing gunshot residue because of a shift in priorities, not a lack of confidence in the science.

The lab had performed the analysis for decades but in recent years had been receiving fewer than 10 requests per year, she said. The agency decided its resources were better used in "areas that directly relate to fighting terrorism," she said.

What to Do About A Positive GSR Test

Steven Howard, writing in Champion, A Magazine For Defense Lawyers:

The use GSR will be facing many legal challenges as time passes. It is still a widely accepted evidence collection procedure. It is therefore essential that every possible means of preventing cross contamination be implemented. 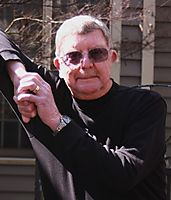