The Firearms and Toolmark discipline is a versatile, well-equipped unit offering a number of services that can be useful to investigators.

Firearms and Toolmark Examiners are dedicated to providing reliable scientific support to all law enforcement personnel. Services are provided at both the investigation and trial-preparation stages of criminal cases involving the use of a firearm or other tool.

*Tools found at the scene of a crime that cannot be associated with a suspect will not be examined.

**No muzzle-to-target distance tests can be done without the weapon that was involved in the shooting. Note: It cannot be determined “how long” it has been since a weapon was fired.

Many other miscellaneous examinations may be performed at the request of the customer. Examiners in the Firearms and Toolmarks discipline may conduct other testing that is of special interest to an investigator. Such requests may be made at the time of evidence submissions or by phone.

Inside the barrels of handguns and rifles are spiral impressions called rifling. The raised portions of the rifling are known as lands and the recessed portions are known as grooves. When a weapon is fired, these lands and grooves cut into the bullet, putting spin on it as it travels through the barrel of a firearm. Because bullets have an oblong shape, spin is necessary for accurate flight.

The impressions of lands and grooves remain on the bullet after it has been fired.

Because each barrel will have imperfections left by the manufacturing process that will leave unique marks on a bullet, firearm examiners can determine whether a bullet recovered from a crime scene or victim was fired from a weapon taken from a suspect. 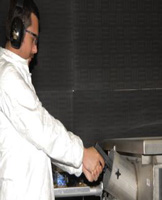 The first step in the Comparison Process is to test fire the firearm into a water tank in the lab.

The second step involves using a comparison microscope to compare the test bullet to the bullet recovered from the victim or crime scene. 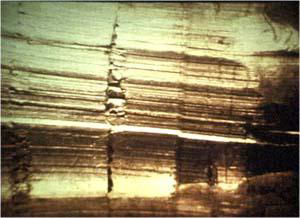 The photo on the left shows the split screen image the scientist sees using the comparison microscope. The right side of the photo shows the test bullet fired from the suspect's gun into the water tank and the left side, the bullet recovered from the crime scene. The marks or striations on each bullet match, indicating that the two bullets were fired from the same weapon.

Since a gun will also leave unique marks on cartridge cases, cases left at crime scenes can link a suspect's weapon to the crime. 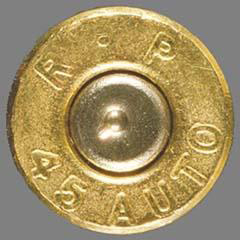 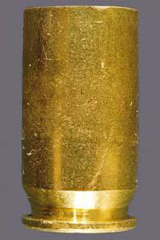 The following photographs of split screen images from a comparison microscope show three different types of markings left on cases that firearm examiners can use in determining if the cases were fired from the same weapons. 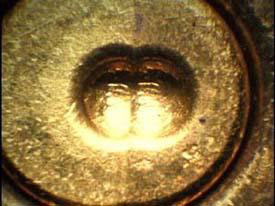 Firing pin impressions — When a weapon's trigger is pulled, the firing pin is forced into the primer cup located at the rear center of the cartridge. 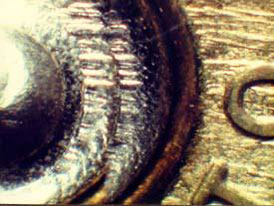 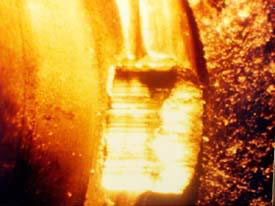 Extractor marks — After a semi-automatic pistol has been fired, an extractor pulls the cartridge from the chamber and ejects it from the pistol.

The Integrated Ballistic Identification System (IBIS) is used to associate evidence in previously unsolved crimes. IBIS is a highly technical, computerized image analysis system that records striated images from bullets and cartridge cases and compares them to a national, and growing international, database of images.

Cartridge cases recovered from victims and crime scenes are placed into the system and comparisons are made when agencies submit confiscated suspect weapons to the laboratory for testing.

The images from the test fires are compared against the entire database. These images can be compared in a very few seconds, an impossible task for a firearms examiner using conventional procedures. These images are correlated by the IBIS system and given a score as to a possible match. The results of this correlation are called High Confidence Candidates, or HCCs.

The firearms examiner makes a final determination to a positive match which then becomes a Hit. When a Hit has occurred, the involved law enforcement agencies are notified and they can then take the appropriate investigative and legal actions.

The Firearms and Toolmark discipline receives tools suspected of being associated with a crime scene. Cutting, pinching, prying, and striking tools are all examined by this discipline. Great care must be taken by the officer to protect the marking surfaces on the tool. If the entire tool cannot be wrapped, the tool's marking surface should be protected using whatever materials are available to the officer. It should be understood that tools found at the crime scene that cannot link a person to the scene will not be examined. 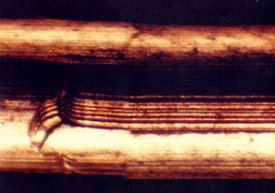 Materials recovered from the crime scene that are suspected of being marked by the recovered tool should be carefully removed from the scene so that the marks are not disrupted. Any cuts made by the officer to remove the suspect areas should be clearly marked so as not to be confused with the suspect areas. Each item should be packaged separately and submitted to the laboratory.

Tools also leave unique marks that can provide important clues in linking a suspect to a crime. The photo on the right is a split screen comparison of copper wires cut by a wire cutter found in the possession of a burglary suspect. The test cut on the right matches the evidence cut from the crime scene.

A maul recovered from a burglary suspect is compared against the indentation left in the victim's doorjamb. 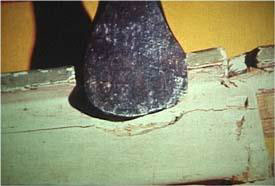 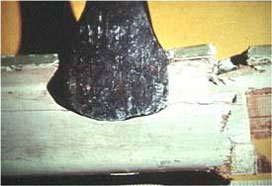 The maul fits the indentation perfectly, providing local investigators with evidence to charge the suspect in the burglary.

The following are general requirements for officers and other law enforcement personnel in collecting and submitting evidence for Firearms and Toolmarks analysis. As in all cases, common sense should be used when attempting to protect the integrity of evidence.

Firearms should be collected carefully so that no parts of the gun are damaged. Officers should make sure that nothing comes in contact with either the inside of the barrel or the breech face, which is where the head of the cartridge rests before firing. All weapons must be unloaded prior to submission to the laboratory. If the weapon cannot be unloaded prior to submission, the packaging must be clearly labeled "LOADED WEAPON".

Weapons removed from fresh water must be placed in the same water for submission to the laboratory. Small lunch coolers work very well for handguns. In the event that a rifle or shotgun is removed from a lake or pond but can't fit into a container, the weapon should be sprayed heavily with WD-40 or other lubricant and taken to the laboratory as soon as possible. The slightest bit of rust to the inside of the barrel will alter the individual characteristics necessary to make identification. If the gun is removed from the water, it must be oiled, making sure that the inside of the barrel is sprayed or filled with oil. This will slow the oxidation process. Weapons removed from salt water should be rinsed, heavily oiled and brought to the crime laboratory. Heavily bloodstained weapons should be packaged in boxes with a biohazard label.

Protecting the Weapon from Damage

Do not insert foreign objects into any part of the gun such as the barrel or ejection port. In the event the gun will be dusted for fingerprints or super glued, block both ends of the barrel gently with tape. This will prevent residue from building up inside of the barrel. If a loaded gun is submitted to the laboratory, you must notify DOFS personnel for instructions prior to submitting the weapon. Insure that the container is properly marked indicating that the firearm is loaded. Loaded firearms must be hand carried to the laboratory — do not leave in the lock box. Do not dry fire or work the action of any weapon that is to be submitted to the crime lab. Leaving empty cartridge cases in the chamber of a revolver when submitted might assist the examiner in determining from which chamber the round was fired.

When bullets and cartridge cases are submitted for analysis, they should be individually packaged in their own canister, envelope, or other small container. Bullets (especially lead) should be lightly wrapped in tissue or cotton so that the bullet surface will be protected from possible damage.

Clothing submitted to the laboratory to be checked for gunpowder should be packaged in a paper bag or box. Do not package wet or bloody clothes until they have air-dried. Wet clothes will mold, making them difficult to examine. Inform the firearms examiner of how the layers of clothing were worn in order to assist in determining the path of the bullet. This information should be written on the evidence bag or the submission form. The Firearms discipline also performs muzzle-to-target distance determinations. In order to perform this service, the gun identified as being used in the shooting must also be submitted. If no gun has been seized, the examination will be limited to a search for gunpowder or a gunpowder pattern.

If it is necessary to have a firearms examiner examine a car or other vehicle associated with a shooting incident, the vehicle should be photographed and transported to the crime laboratory as soon as possible. Officers in charge must ensure that glass shattered or cracked by a projectile does not break further during the transport. Examining the glass fracture patterns can make valuable conclusions.