It is a capital mistake to theorize before one has data. Insensibly, one begins to twist facts to suit theories instead of theories to suit facts. —Sherlock Holmes, A Study in Scarlet, by Sir Arthur Conan Doyle

As Sherlock Holmes pointed out, many types of investigations are susceptible to prejudgment, but few as often as fire scene investigations. Fires, by their destructive nature, consume the evidence of their initiation and progress as they grow. Investigations are compromised, and often scenes are further destroyed by the activities of the fire service, whose primary responsibilities are to save lives and protect property against further damage. Fire scenes often involve all manner of public entities: emergency medical, law enforcement, and fire services. Public utilities such as gas and electric companies may be involved. Passers-by, owners, tenants, customers, delivery agents all may have relevant information. The press and curious individuals attracted to large fire scenes can complicate investigations, as they make security a necessity. As has frequently been said, “A fire investigation is like a picture puzzle. Everyone involved with it has some of the pieces, but no one has the whole picture. It is up to the investigator to gather enough of these pieces together to solve the puzzle.”

Since Roman times, civil authorities have recognized the threat that fire represents, not only to the well-being of individuals, but also, and perhaps more importantly, to the welfare and security of the community as a whole. In the days of wooden walls and roofs and straw-covered floors, any fire could ravage an entire city. So, it was in the interest of all concerned to investigate fires and establish how they began. Civil authorities attempted to control the fire risk by assessing penalties if an accidental fire was allowed to get out of control. Dangerous practices, such as leaving cooking fires unguarded, were identified and controlled.

William the Conqueror issued an edict that cooking fires be damped or covered after a particular time of evening so that unattended fires could not flare up. This policy of couvre feu (cover the fire) gave rise to the “curfew” of today. If authorities could determine the fire was deliberately set, the perpetrator could be identified and punished. Some of the oldest English common laws regarded arson to be the crime of burning the house or dwelling of another. The crime of arson was considered to be such a danger that it was punishable by death.

The same rationale applies today. Fires of accidental cause need to be identified, so that dangerous practices, such as filling kerosene room heaters with gasoline, can be eliminated by public education, or so that defective or dangerous products, such as instant-on televisions or room heaters with no overheating or tip-over protection, can be taken off the market or modified so they no longer pose a significant fire risk. Fires of incendiary (i.e., deliberate) cause must be detected, so that the firesetter can be intercepted before doing more harm and punished as necessary.

The Fire Problem in the United States

According to the National Fire Incident Reporting System (NFIRS) of the U.S. Fire Administration (USFA), Federal Emergency Management Agency, the United States has one of the highest per capita fire death rates among industrialized nations. In 1997, the U.S. fire death rate was 15.2 deaths per million. This was reflected in approximately 4,050 deaths and more than 23,000 injuries for that year alone. Nearly 2 million fires occurred in 1997, with a total estimated dollar loss of $8.5 billion.

Arson fires (defined as incendiary/suspicious in NFIRS) comprised almost 16 percent of all reported fires in 1997 and accounted for more than $554 million, or 15 percent, of the total estimated dollar loss. Since all fires are considered accidental until they can be proven to be intentionally set, the reported numbers are probably very conservative. There is also reluctance to report arson fires, as it is feared that it may cause a negative impact on the community or its economy.

While the general trend in numbers of fires and fire deaths has shown a steady gradual decline over the past decade, the overall costs are still significant. A continuing effort must be made to accurately identify the exact origin (where the fire started) and cause (the factors that brought the ignition source and first material ignited together) of all fires. This will assist in learning more about how to prevent fires in the future. Perhaps more important are preventive measures such as installing working smoke detectors and residential sprinklers in every home and using public education programs to effect behavior change.

The Problem of Fire Investigations 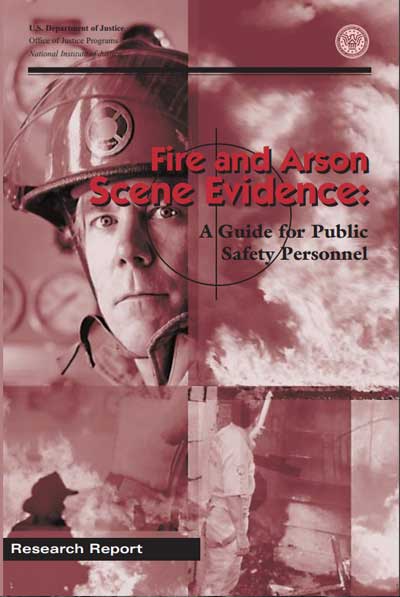