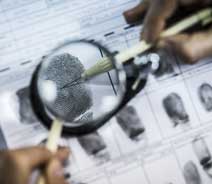 As most in the fingerprint community are aware, the very foundation of fingerprint identification was challenged in 1999 in United States v. Byron C. Mitchell, Criminal No. 96-00407. It was alleged that the defendant Mitchell's fingerprint was found on the getaway car used in an armored car robbery. This case was significant in that it was the first challenge as to the validity of fingerprint identification in light of the standards for expert testimony as set forth in the 1993 United States Supreme Court decision in Daubert v. Merrill Dow Pharmaceuticals, 509 U. S. 579, 588 (1993) in which the court discussed four basic factors in regard to scientific testimony: (1) Testing (2) Peer review (3) Error rates and (4) Acceptability in the relevant scientific community. Trial judges were also given the responsibility of being gatekeepers to bar junk science from entering the courtroom.

This case resulted in a "Daubert Hearing" to determine the validity of the defendant's claim that there was no scientific basis for the assertion of individuality in the matching of fingerprints and that therefore the fingerprint identification from the getaway car was scientifically invalid. The government presented a number of fingerprint experts and scientists to argue for the scientific validity of fingerprints. On September 13, 1999, after hearing from both the Government and defense witnesses, the Honorable J. Curtis Joyner of the United States District Court for the Eastern District of Pennsylvania upheld the admissibility of fingerprint evidence and rejected the challenge by the defense attorney to exclude that evidence.

Most importantly, the court took judicial notice of two factors:

The court did not take judicial notice of the third requested factor: Individualization, that is, a positive identification can result from comparisons of friction ridge skin or impressions containing a sufficient quality (clarity) and quantity of unique friction ridge detail. The court ruled that this is an issue for the jury to decide. The fingerprint science is valid, but that does not preclude the defense from presenting expert testimony challenging a particular identification—which is the way it has always been.

The science of fingerprints meets the standards set forth in Daubert:

To present latent print testimony in court, a witness must qualify as an expert on the basis of knowledge (fingerprint science and related matters), skill (comparing friction ridge prints), expertise (in fingerprints and related work), training (how to do the job and it related matters), or education (formal courses in the fingerprint science and sciences in general). The witness must also be able demonstrate to the court that the testimony is based upon sufficient data or facts, that the testimony is the product of reliable principles and methods, and that the witness has applied the principles and methods reliably to the facts of the case. The witness must demonstrate reliability in both the science and themselves. This is the basis for questions by the defense on the error rates of the science, the methodology and the examiner.

As of the date of publication of this book, the science of fingerprints has prevailed over every challenge made to it by the standards set forth in Daubert.

Many state courts allow scientific testimony based not upon Daubert, but rather still adhere to the standards set forth in Frye v. United States, 293 F. 1013, 1014, D. C. Cir. 1923, in which the admission of expert opinion based on a scientific technique depended upon the facts that the testimony was based upon reliable principles, that these principle have correctly applied and the principles were "generally accepted" in the relevant scientific community.

Yes, the "science of fingerprints" is a true statement whether the court goes by Daubert or Frye. When entering the courtroom, the fingerprint expert must be prepared to defend their discipline.

Legal issues, challenges and decisions can change periodically. The fingerprint expert is to keep abreast of all the issues that might impact upon their examinations or court testimony.

Gary Jones began his career in fingerprint work with the Federal Bureau of Investigation in 1964. At the time of his retirement in 1997 he was a Supervisory Fingerprint Specialist in the Latent Fingerprint Section. During his retirement he operated a private fingerprint consulting business, "Gary W. Jones Fingerprint Services," in Summerfield, Florida. On numerous occasions Mr. Jones presented fingerprint testimony in federal, state and local courts throughout the United States and was accepted as an expert in each instance. He instructed federal, state and local law enforcement personnel throughout the United States in all aspects of fingerprint science, including the presentation of expert courtroom testimony. Gary Jones wrote articles relating to fingerprint science and was published in the International Association for Identification's (IAI) publication The Journal of Forensic Identification. He was also the co-author of the FBI's Latent Fingerprint Training Manual. Mr. Jones was a member of the IAI, the Florida Division of the IAI, and served on the Board of Directors of the New Jersey Division of the IAI.

Learn more about the book Courtroom Testimony for the Fingerprint Expert, 2nd Edition

Purchase the print book at a 10% discount: purchase Courtroom Testimony for the Fingerprint Expert, 2nd Edition