Excavations of Skeletal Remains From an Anthropological Point of View

Mankind has waged war for centuries. The twentieth century has become an age of genocide, atrocities and mass graves. The first recorded opening of mass graves in this century was during the Second World War. In the spring of 1940, the Soviet Red Army executed Polish army officers and prisoners of war. They were buried secretly in mass graves, some located in a forest near the village of Katyn in Belarus. Three years later this burial site was detected by the Germans and more than 4,000 bodies exhumed. Since the end of that war in 1945, only geographic boundaries have changed. In the past decades, civil wars in South and Central America, Asia, Africa and lately in Europe have taken the lives of hundreds of thousands of people. 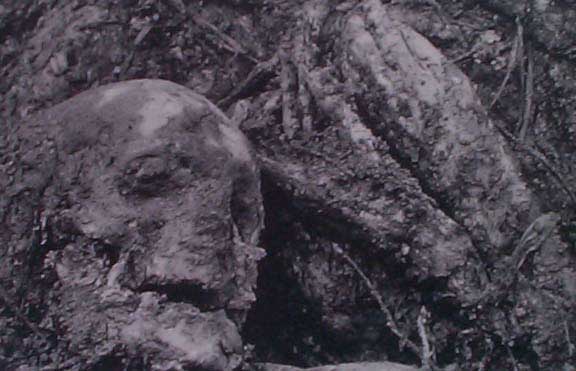 The worst genocide in the Baltic region took place during the war of 1991-1995 on the territory of former Yugoslavia, especially in Bosnia-Herzegovina (BiH). Under the guise of "ethnic cleansing," about a quarter of a million people lost their lives. Another two-and-a-half million became refugees. As of June 2000, according to the International Committee of the Red Cross, there are an estimated 15,000 to 20,000 missing persons. They may be buried in mass graves in the forests, fields or hills of their homeland. They may lie undetected on the surface waiting to be discovered, identified and returned to their families for proper burial.

Beginning early in 1996, the first "after-the war-exhumations" in the territory of Bosnia-Herzegovina took place. No one was prepared for the task of exhuming the incomprehensible number of bodies or skeletal remains. In the first year of exhumations, almost 2,000 remains were recovered in BiH, and this is but a fraction of the missing or presumed dead. There are still thousands of bodies to be exhumed and examined in the coming years. The main purpose of opening the mass graves or the clearing of unburied surface remains is to identify the deceased and return them to grieving families. Unfortunately, the problems of identification are compounded by the lack of documents, distinctive clothing or personal belongings. Therefore, expectations for eventual identification of unknown remains lie in the ability of the forensic specialists to estimate age, gender and stature of skeletal remains based upon existing anthropological standards and DNA.

Working with the International Commission for Missing Persons (ICMP), in Bosnia-Herzegovina, I was exposed to grave sites where different exhumation teams were making recoveries. These sites and many more are being investigated for humanitarian reasons in the hopes of identifying the remains with their respective families.

Prior to organizing an excavation of a suspected grave (mass or single) some basic background information about the number or victims, year of burial and type of grave (e.g.: dug hole, natural depression, cave) must be obtained. This information will assist in planning for resources, equipment, number of workers and the amount of time that will be necessary to perform recovery of remains. This is the most critical issue for a successful excavation, and it is imperative that reliability regarding this information is confirmed.

Statements of witnesses are not always positive in respect to exact locations due to emotional stress, seasonal changes in topography or landmarks that may have been destroyed, etc., but still are the most important and reliable source of information for general or specific site location of the grave. However, if possible, information should be collected from more than one witness. If the grave's specific location is not known, it may be verified by other means.

Before the excavation can take place, a preliminary visit to the suspected site is necessary to map the area to be excavated. Above all it must be insured that the area has been cleared of surface debris. Search party personnel need to be briefed on customary elements that indicate the location of a gravesite.

The most useful indicators for a fresh, or new, gravesite are:


If the grave is older, oftentimes there may be no visible features to indicate a disturbance in the soil. One has to keep in mind that graves can be purposely concealed. It may be necessary to use other means of detection to reveal a general area where a grave may be located.

Usefulness of the first three means may be questionable. Availability of aerial photographs is very limited and the use of GPR or a magnetometer is more of theoretical than practical interest. Those high-tech, very sophisticated instruments are dependent on the specific environment in which the grave may be located, and have to be operated by trained personnel. GPR can "see" as deep as 1.5 to 2m into the soil, depending upon soil character. Sometimes it can "see" the image or structure of a body or other materials (non-soil) at a specific depth. Applicability of the magnetometer (also called a proton magnetometer) depends on soil quality. It works better in homogeneous soils. Unfortunately, both techniques rely on the finding of soil disturbance and require a large amount of expensive equipment on the site. This equipment needs to be operated by personnel skilled in interpreting the information displayed on the computer screen in order to "translate" the patterns of soil. Additionally, covering the searched area takes a lot of time and even under the best of conditions, it may be difficult to interpret what is depicted on the computer screens.

Following the location of the gravesite, the probable dimensions (length, width and depth) should be estimated as closely as possible. The ground surface should be examined for any evidence (bullets, personal belongings, jewelry, etc) before being slowly and carefully removed. In some cases, especially those of mass graves, heavy equipment (backhoe) may be used initially to remove the topsoil, with a monitor to watch carefully for evidence or remains exposed by the machinery. Soil removal may then be probed by careful use of picks and shovel and finally, with trowels and brushes.

Exposure to the climate accelerates decomposition and destruction and thus it is essential that unburied bodies be removed as soon as possible. Buried bodies are usually not accessible to animals, insects or changes in surface temperature, therefore, the rate of decomposition relies solely on the activity of microorganisms and soil structure. In the case of single or shallow graves, the process of decomposition is usually more rapid, while in mass graves — where bodies are usually packed very tightly and there is little oxygen to promote growth of organisms and decomposition — the bodies may stay well preserved. Unburied bodies are exposed not only to the destructive effects of climate but also animal activity. The potential for animals to destroy or scatter body parts increases with time. The number of bones missing directly correlates to the time elapsed since death. Exposure to environmental elements for prolonged periods also decreases the prospects of positive identification.

Unburied bodies are exposed to many variable factors and in the search thereof, one must be prepared for the following: 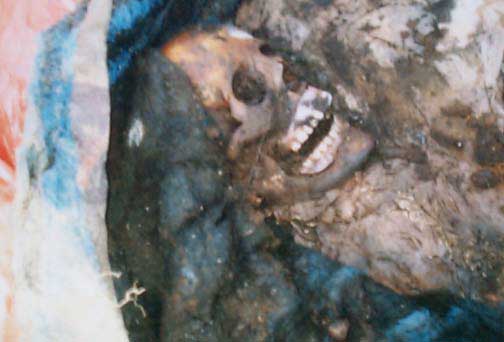 Although the process of decomposition begins at the time of death, it is also affected by the clothing worn by the deceased at the time of death. In lightly dressed bodies, the process of disarticulation is usually evident after a period of several months. Heavier clothing will prolong decomposition. The course of decomposition lasts until only hard tissues such as teeth and bones are left. Hair may continue to adhere to the skull. After approximately one year, most bones may be strewn around and the likelihood of recovery is minimal.

Determination of sex is crucial for further analysis of unidentified human remains, because all techniques of assessment of age and calculation of stature are different for male and females. The innominate bone, which comprises the pelvis, offers the most definitive traits. The second-most important bone is the humerus or femur. The skull, praised traditionally for many decades the most discriminating factor, is now considered of lesser importance.

Determination of sex from pre-adult bones is rather difficult to define. Some anthropologists try to compare stages of tooth calcification with the stages of maturation. They assume that in boys, the post-cranial skeleton matures more slowly than in girls, while the rate of calcification of the teeth is about the same. Since the method is difficult in application for an inexperienced person, it is advisable to limit determination of sex from immature skeletal remains.

The skull, which for decades was a favorite and only attribute of sex determination, recently became less popular. All skull features have been proven to be relatively subjective and therefore forensic anthropologists prefer to use the much more objective traits of pubic bones for sex determination. Nevertheless, the skull should be used additionally in the assessment. Since most forensic pathologists feel much more comfortable examining the skull than other bones, examination of the skull in regards to sex determination shouldn't be abandoned in the analysis of unknown human skeletal remains. Indicators of sex from the skull should be treated always as complementary information.

In general, the development of teeth, appearance of the ossification centers, epiphyseal union and length of the long bones are the principal criteria for estimating age at death in pre-adults. Even if dental development provides the most accurate results, other aging methods should be employed if possible.

Dental development (calcification and eruption of teeth) gives the most accurate age information in pre-adults because it is largely controlled by genetic factors and relatively susceptible to environmental factors.

Appearance of ossification centers occurs from the birth to about 15 years and can be easily compared with available standards. However, in forensic cases, centers themselves rarely survive because of their fragile nature. 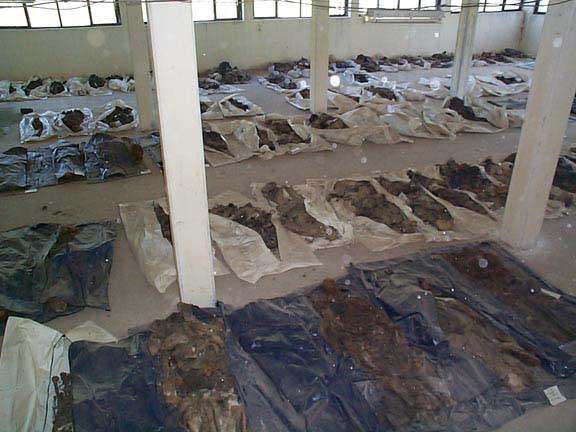 Epiphyseal union techniques are most commonly used for aging immature bones from about 10 to 20 years. There are available standards depicting epiphyseal union development for most long bones.

&Estimation of age at death from immature skeletal remains may be derived from the appearance of the ossification centers and stages of epiphyseal union. All bones of the human skeleton develop from a number of separate ossification centers. By the eleventh prenatal week, there are approximately 800 centers of bone growth. These centers unite as the fetus grows, and at birth there are about 450 centers. The adult skeleton has only 206 bones.

Appearance of ossification centers and the beginning of epiphyseal union have a fairly definite sequence and therefore can be quite a reliable indicator for age assessment. The process of ossification and epiphyseal union begins earlier in females than in males. The average is about two years in advance to males. This subsequently leads to a shorter period of growth in females and is responsible for their smaller adult size. 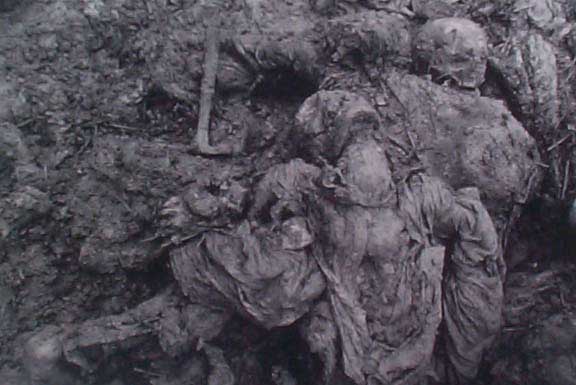 Generally, criteria used for estimating age in adults are less precise and accurate than those for pre-adults. When assessing age at death from adult skeletons, one can no longer rely on relatively regular skeletal and dental changes associated with growth and development, and must concentrate on recording age related to changes that occur in mature skeletons.

Although the sites visited in Bosnia-Herzegovina were a result of "ethnic cleansing," these ideas and approaches can be used in cases from a single homicide site to the recovery of missing American soldiers from past wars. It is important that everyone involved be capable of comprehension and compliance with the general criteria for such work. Since the assistance of a forensic anthropologist or archeologist is not always possible, this paper should be of interest to anyone who might be engaged in the process of collection of surface bones, excavation of mass graves and the examination of skeletal remains for identification.


Article submitted by the Author