Comparison of forensic fingerprint images for purposes of identification is a complex task that, despite advances in image processing, still requires highly trained human examiners to achieve adequate levels of performance. Latent fingerprints collected from crime scenes are often noisy, distorted, and represent only a portion of the total fingerprint area, making matching tasks difficult. While it is clear that expertise in fingerprint comparison, like other forms of perceptual expertise, such as face recognition or aircraft identification, depends on perceptual learning processes that lead to discovery of features and relations that matter in comparing prints, relatively little is known about the perceptual processes involved in making fingerprint comparisons, and even less is known about how the visual characteristics of fingerprint pairs relate to comparison difficulty. This project aims to determine more about the relationship between the measurable, visual dimensions of fingerprint pairs and the level of comparison difficulty for human examiners, both experts, and to a lesser degree, novices. For this research, we assembled a new database of latent fingerprints, matching tenprints, and close, non-matching tenprints. Using this database, we measured expert examiner performance and judgments of difficulty and confidence in a variety of settings. For the experts, we developed a number of quantitative measures of image characteristics and used multiple regression techniques to discover predictors of error as well as perceived difficulty and confidence. A number of useful predictors emerged, including variables related to image quality metrics, such as intensity and contrast information, as well as measures of information quantity, such as the total fingerprint area. Also included were configural features that fingerprint experts have noted, such as the presence and clarity of global features and fingerprint ridges. Within the constraints of the overall low error rates of experts, a regression model incorporating the derived predictors demonstrated reasonable success in predicting difficulty for print pairs, as shown both in goodness of fit measures to the original data set and in a cross validation test. The results indicate the plausibility of using objective fingerprint image metrics to predict expert performance and subjective assessment of difficulty in fingerprint comparisons. We also examined the extension of these results to settings that better approximate real-world fingerprint examiner scenarios, and found our regression model continued to provide significant explanatory value for a substantial portion of the prints. While further research is necessary, this research provides strong support for the plausible but previously untested assumption that for expert fingerprint analysis, difficulty (and by extension, error rate) is in significant part a function of measurable, visual dimensions of print comparison pairs. In addition to this primary focus, we also conducted several extensions to this research, involving expert metacognition and novice comparison. These experiments showed that experts have substantial, albeit imperfect, subjective knowledge about the difficulty of print pairs. Our experiments also showed that novices perform very poorly and showed no consistent pattern of feature use. This research thus also contributes to our understanding of the source and extent of human expertise in latent fingerprint analysis. 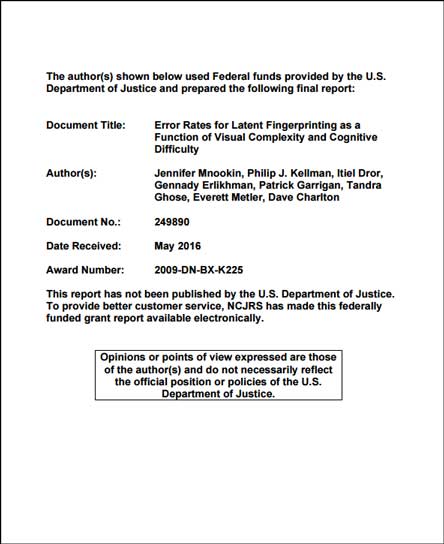