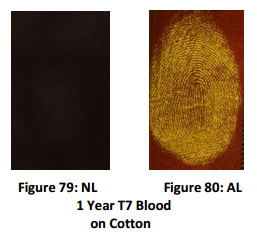 Impressions are commonly found as evidence associated with crime scenes. Current fluorogenic enhancement methods for impression evidence are problematic for DNA preservation and are often impractical for crime scene use. This may lead to an either or decision made during evidence collection based on whether to enhance the impression and potentially damage the DNA evidence, or to gather the DNA evidence, which may destroy impression evidence. ZarPro™ Fluorescent Blood Lifters have been successful in lifting, enhancing, and preserving blood impressions; however, this technology had not been explored to determine effectiveness in the recovery of non-blood proteinaceous impressions. This project focused on optimizing the detection, enhancement, and preservation of impressions deposited in blood, semen, saliva, eccrine/sebaceous sweat, and non-human oil using Zar-Pro™ Fluorescent Lifters and three novel Fluorogenic Enhancement Sprays which were developed in the course of the project. The first set of trials were devised to test the effectiveness of these enhancement methods across a broad range of substrates, titled the Substrate Trials. In the Substrate Trials impressions were deposited in the above mentioned biofluids on a series of fifteen substrates of varying porosity and were enhanced after one hour and one day. A subset of substrates from the Substrate Trials were used for the Aged Trials. In the Aged Trials impressions were deposited in the five biofluids and were enhanced after one month, three months, six months, and one year. Zar-Pro™ Lifters and one of the developed Fluorogenic Enhancement Sprays were found to effectively enhance and preserve blood and semen while having more limited success with saliva, eccrine/sebaceous sweat, and non-human oil. Based on preliminary results, the enhanced impressions remain fluorescent and can be preserved long-term. In attempt to create DNA friendly fluorogenic enhancement methods, DNA extraction, amplification, and analysis was conducted on each of the enhancement methods utilized in this project. It was found that amplifiable DNA capable of producing full STR profiles can be extracted from Zar-Pro™ lifted semen and blood impressions, but not from impressions in any biofluid treated with the Fluorogenic Enhancement Sprays. In simplifying the collection and preservation of impression evidence, while expanding the utility of enhancement methods to include DNA friendly approaches, both impression evidence and DNA can be recovered from a single evidentiary item. 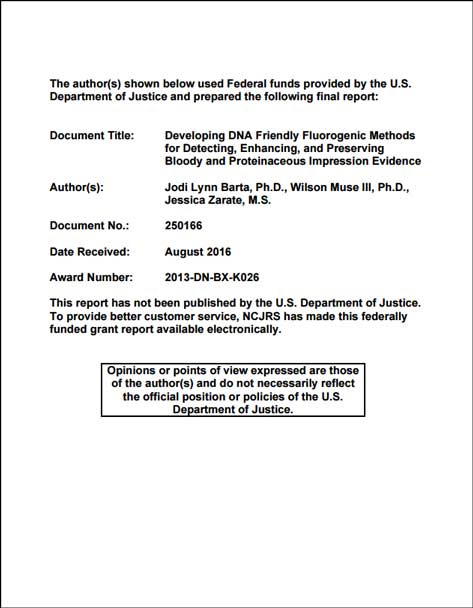 With coupon code "$5 OFF" at checkout