The Process of Decomposition 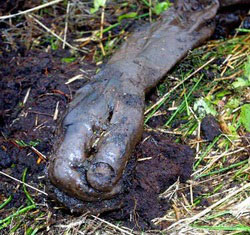 Decomposition begins in the minutes following death. Any seasoned investigator will attest to how quickly a blowfly can appear to lay eggs on a decedent's body, a common occurrence in the earliest stages of breakdown, taking place just minutes after a person has been pronounced dead. This may take place indoors or outside, depending on the insect's access. Though decomposition cannot be reversed, it can be delayed. Extreme cold (think underwater, the winter months, or even morgue refrigeration) can slow the onset of the body's natural breakdown processes. Once changes occur, fragile evidence can be permanently destroyed. For example, postmortem blood samples may be rendered useless for certain tests in the hours after death due to bacteria and breakdown processes that will affect results.

Some of the first noticeable stages of decomposition following death are rigor, livor, and algor mortis. Rigor mortis is the stiffening of the muscles that is attributed to the depletion of ATP, which, in life assists with muscle contractions. Livor mortis is the settling of red blood cells to the dependent areas of the body, due to the cessation of cardiac activity and gravity. Algor mortis refers to the cooling of the body, which will gradually become the same temperature as the ambient environment.

The proliferation of bacteria from within the gut begins the putrefaction process. The result is rotting flesh and therefore an unpleasant odor associated with the body; when others describe the "smell of death," the body has typically reached this process. After a relatively short period of time, a person may appear disfigured and indiscernible by gender. This natural process can leave behind little to no soft tissue, depending on how long it is until the body is discovered and environmental conditions.

Decomposition is the most common reason that a body is rendered unidentifiable, which can halt an investigation. There are, however, other factors that lead to issues of identity including animal and insect activity, the elements, or conditions such as fire or massive trauma. Following the commission of a homicide, a suspect may make efforts to conceal the victim's identity through intentional processes like dismemberment.

There are so many factors that can create difficulties in the proper identification of human remains. There are, however, a number of ways to determine a person's identity:

It's not surprising that tattoos can help to identify individuals when approximately 30% of adults in the U.S. are inked. Even popular tattoos may be crafted in different colors and on different areas of the body that are specific to a person. Often times, investigators will utilize social media pages to view such personal photographs and details of tattoos.

In death, there are many circumstances where the body is not found intact. Like tattoos, birthmarks or other distinguishable physical characteristics can help investigators identify a body when there are few other ways available. Other permanent and unique marks can include scars, burns, and surgical incisions.

Human teeth are said to be even more resilient than bones, and often survive conditions such as fire, certain traumas, and animal activity. While extracting genetic material from teeth can be costly, the more popular method is to obtain dental records when the jaw bones are intact. Dental work, unique root structures, and other features can assist in determining a deceased person's identity.

It is not uncommon for some hair to remain affixed to the scalp or near human remains. The hair strand itself contains mitochondrial DNA, a type of familial DNA, while the root will contain nuclear DNA, or genetic information specific to that person. If no other viable sources of DNA are an option, hair can serve this purpose. It is less common to rely on visual identification of hair under a microscope to determine a decedent's identity.

A person's fingerprints are one of his or her most identifying characteristics. Because the details on friction ridge skin are formed in utero, even identical twins split from the same egg will display different fingerprints. Fingerprints are collected throughout a person's lifetime and do not change with age. They may be available from a childhood craft project, or on file from an employer or arrest. While it may be difficult to obtain fingerprints from a decomposing body, it is not impossible.

Surgical hardware and implants are marked with specific numbers and letters to designate the lots from which they originated. The information will be recorded in medical records and is often physically visible on the equipment or implants once removed from the body. This is a more invasive way to positively identify a body, though X-rays of fixtures can also supplement the probable identity of an individual.

Investigators must remember that in order for a comparison of samples, a standard must be available to compare to the unknowns, or the samples recovered from the deceased body. Detectives can work to obtain these standard samples.