This paper is to illustrate that when conducting a crime scene investigation, and the use of bloodstain pattern interpretation is needed, deciding what tools to use can be of most importance. When determining the point of origin of bloodstain patterns, a decision must be made to utilize the computer or manually stringing a bloody crime scene. Each has its time and place.

A white male with a single gunshot wound to the head, back to front and through and through. Forward bloodspatter in the immediate area of the shooting with transfer and projected available in the area where the body was found. Manually stringing bloodstains within the pattern area was used in the courtroom to display the point of origin.

A white female with a single gunshot wound in the mouth; front to back and through and through. This is an outdoor scene with multiple bloodstain patterns and multiple directions of impact spatter. The computer gave a more applicable view of multiple directions/multiple points of origin, within a small area where stringing the stains would have been difficult at best.

In case number one, a white male was found shot in the back of the head, lower center area, with a .45 bullet exiting the top front center area of the forehead. The scene was in the bedroom of a residence with 90° bloodspatter being located on the bedroom dresser and items found on the dresser. The left second drawer of the dresser was partially pulled open with measurable bloodspatter located on a white cardboard photo frame. (Figure #1) 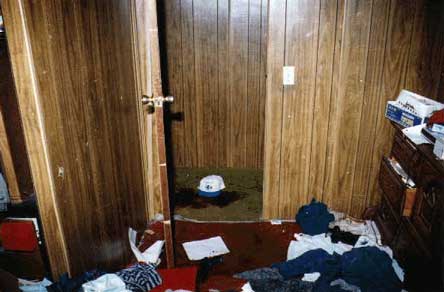 After manually stringing the bloodstains on the cardboard photo frame, the point of origin (the head of the deceased) was found in such a position that the body was bent forward at the waist consistent with retrieving an item from the partially open drawer. The girlfriend of the complainant (deceased) stated that the complainant committed suicide inside the bedroom with the door closed. Positioning the complainant became a pivotal point in the case investigation displaying a position inconsistent with suicide.

On top of the dresser on the left side, directly above the partially open drawer, was a white shoe box and a multi colored popcorn box. The front facings of these boxes contained bloodspatter consistent with forward spatter in and near 90°. The white cardboard photo frame was the top layer of items within the drawer with measurable stains and with bloodspatter consistent with forward spatter. After removing the white cardboard photo frame from the drawer, a void line was present allowing the item to be place back in the drawer for reconstruction purposes. (Figure #2) 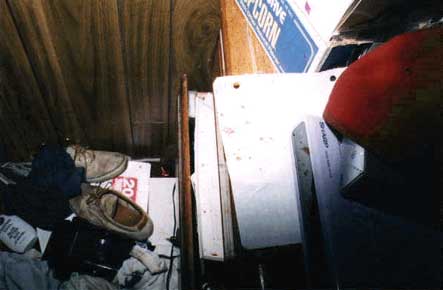 The outside of the bedroom door, the side facing the hallway, contained projected bloodstain patterns, transfer bloodstains and these both showed movement left to right and downward (the door open and movement from the bedroom toward the hall) where the body was found in the hallway.

The limited amount of measurable stains on the white cardboard photo frame, made the use of the computer limited in program ability, therefore, stinging was the method to give a visual display for the point of origin. (Figure #3) 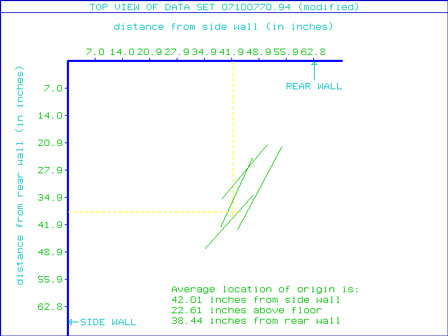 During the trial, the bedroom furniture was brought into the courtroom where a recreation of the stringing was done in front of the jury. After positioning the complainant, the Medical Examiner and the Firearms Examiner reinforced the bloodstain pattern testimony that I had already given. (Figures #4 and #5) 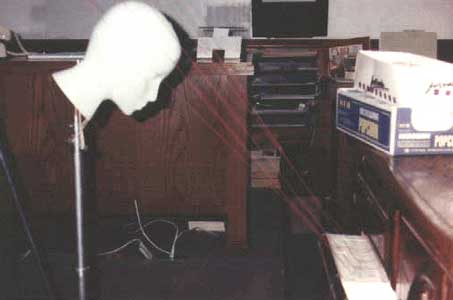 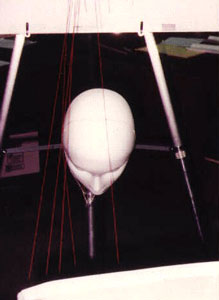 The jury found the defendant guilty of murder with a sentence of ten years in the Texas Penitentiary.

In case number two, the crime scene is located at an apartment complex with the scene located outside next to one of the apartment buildings. The complainant (deceased) was found on the ground with a single gunshot wound into the mouth and exiting the top rear area of the head. Located against the wall/doors next to the complainant were multiple bloodstains patterns, multiple directions/multiple points of origin and multiple bloody types. (Figure #6) 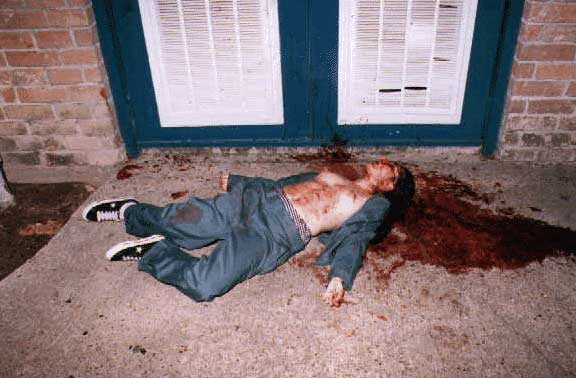 After evaluating the crime scene, an attempt to string the bloodstains was made. This immediately became difficult and was obvious too many directions and locations within a small area would make the visualization confusing. 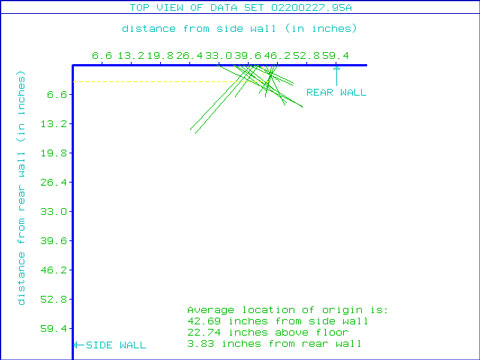 The case was ultimately ruled a suicide by the Medical Examiner's Office, yet a serious event occurred at or near the time of the suicide.

The crime scene investigator needs to keep his options open and be aware of the tools available. These two cases are examples where the availability of technology and the manual use of stringing was utilized and the right tool was used for the right circumstance.

Daniel Rinehart was with the Harris County Sheriff's Department, (Houston, Texas), for over 17 years and had been assigned to the Identification Division/Crime Scene Investigation Unit for over 16 years. Specialization includes Crime Scene Investigations, scene/forensic photography, fingerprints/latent prints, and bloodstain pattern analysis. Member of the IAI and is a Certified Senior Crime Scene Analyst; Regional Vice President of the Homicide Investigators of Texas; and Vice President of the International Association of Bloodstain Pattern Analysts. Holds a TCLEOSE Master Peace Officer and Instructor License. Has made presentations and instructed Crime Scene and Bloodstain Pattern Analysis courses across the United States.

Daniel Rinehart is currently consulting under Rinehart Forensics with contracts that include: