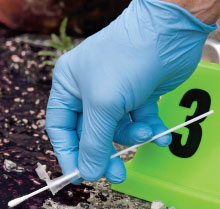 To protect the evidence we wear gloves to avoid placing our fingerprints on evidence and to avoid cross contaminating the evidence.

Further, wearing one pair of gloves throughout the scene leads us back to the first reason we wear gloves-to protect us from the evidence. If we touch something potentially hazardous, such as body fluids, and then our pen, our pen is now contaminated. We take off our gloves and pick up the pen and now we are contaminated.

So remember to protect yourself and the evidence by not only wearing gloves in the crime scene, but by changing gloves before collecting each item of evidence.

One more thing: be sure the gloves you use are powder free. The powder in gloves can bind with the DNA you collect and interfere with the extraction and analysis of the DNA. And choose nitrile gloves if you are allergic to latex gloves.

Previous articleWearing gloves while processing a crime scene, Part I
Next articleCrime Scene Investigators and Death Investigators: How the Positions Vary 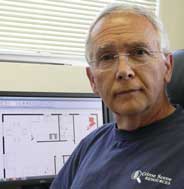