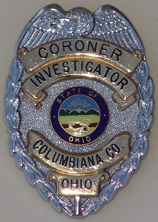 The world of forensics has seen major shifts in hiring practices when seeking to fill investigative roles in local jurisdictions. The trend of hiring civilians to perform the confidential field work that once was offered only to sworn personnel has provided qualified individuals with new opportunities. Two positions commonly filled by civilians are those of crime scene investigators and death investigators.

The journey for each type of investigator typically begins through a college education. There are no national set standards for minimum education requirements, but many local police departments and medical examiners' or coroners' offices expect that applicants will be educated in a relevant field. Job bulletins commonly list a minimum requirement of a 4-year degree in criminal justice or a natural science. In both fields, ongoing training is emphasized regardless of the level of degree obtained, and will be provided by the employer.

Each applicant who is seriously considered for an investigative role will undergo a background investigation. Candidates for employment must prove trustworthy as their responsibilities will include the handling of sensitive information. This screening may include contact with former supervisors and coworkers, and the prospective employee may be required to submit for various tests, including a sample for a drug screen, a polygraph examination, and a psychological and physical fitness evaluation.

In some areas of the country, crime scene investigators and death investigators perform similar functions at death scenes. They may take notes, document the scene and body with photographs and sometimes other means, and collect evidence pertinent to the case. The often work in tandem and can assist one another with body positioning and scene searches.

Both crime scene investigators and death investigators typically wear uniforms to ensure they are easily identifiable when out at scenes, and because of the nature of the work, which includes biohazards and adverse scene conditions. The most common uniform for each is a short-sleeved collared shirt and cargo pants, as well as protective boots. Depending on the climate, there will be other components to the uniform provided by the respective department.

In order to qualify for work as a medicolegal death investigator, applicants may be required to have a science or medical background coupled with a relevant education. Often, former paramedics and registered nurses are excellent candidates as they are already familiar with medical terminology and different healthcare and pathological processes. It is also possible to obtain experience through less traditional routes, such volunteer or internship work.

Police departments tend to be more likely to accept recent college graduates as they are willing to train them in their preferred methods of crime scene investigation. While it is difficult to secure employment without experience, it is not impossible. Medical examiners' and coroner's offices are more likely to hire seasoned professionals, or those with some related work experience.

Whereas crime scene investigators are considered "generalists" who respond to everything from property crimes to homicides, death investigators have a function specific to their title. At scenes, the police typically have jurisdiction over the crime or death scene, while the medical examiner's or coroner's office will have jurisdiction over the body. Because crime scene investigators are a division of police departments (typically), and death investigators work for medical examiners' or coroners' offices, their duties will be particular to their official legal authority over the case. This can vary quite a bit, even among different counties within the same state.

A crime scene investigator typically performs a LOT more work on scene than a death investigator does, and they are much more involved in scenes as whole. They have the opportunity to fully process a scene, utilizing various equipment, presumptive tests, and current technology. Death investigators must understand scene circumstances and will be privy to this information, but have no grounds for involvement in the surrounding environment.

While death investigators perform less scene work, they are more autonomous in their duties. On the contrary, crime scene investigators are commonly instructed by detectives to perform certain duties. Death investigators are also much more involved in functions back at the office, in the autopsy suite, and in the morgue. They often speak with decedents' family members and have a vested interest in the cause of death beyond whether or not it was the result of a criminal act. Their positions fall under the category of public health, so there are a number of reasons for inquiries following a death.