This was a ghastly crime. 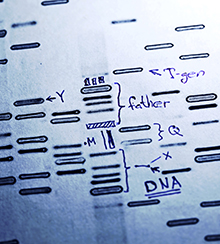 Nineteen-year-old Mary Sullivan had just moved from Cape Cod to Boston, where she rented an apartment in the bustling Beacon Hill neighborhood. Within a few days of her arrival in January 1964, she was found dead. Her attacker raped her and strangled her to death.

Sullivan was one of 11 women whom Albert DeSalvo — known as the Boston Strangler — would later confess to killing. However, he then recanted, leaving lingering doubts about the possibility that the real assailant had eluded capture.

DeSalvo was never convicted of any of the Strangler killings, but he was sentenced to life in prison on other rape charges. Fellow inmates stabbed him to death in 1973. For decades after his death, experts argued about whether he really was the Strangler or whether someone else committed the crimes and got away.

Evidence that finally linked DeSalvo to the Sullivan assault emerged in July 2013.

Over the years, NIJ has funded the examination of "cold cases" across the country through its Solving Cold Cases with DNA program. The funding helps police departments identify, review, investigate and analyze violent crime cold cases that could be solved through DNA analysis. Sometimes the cases are so old that DNA testing did not yet exist when the crimes were committed, and testing biological evidence now might show a match with a suspect.

In 2009 and 2012, the city of Boston received competitive grants under NIJ's cold case program. The Boston Police Department's cold case squad decided to use some of the NIJ funding to test DNA from a nephew of DeSalvo's and look for a match with seminal fluid that had been found on Sullivan's body and on a blanket at the crime scene. When forensics experts ran the test, they got a hit.

The match was possible because of tests that zero in on short tandem repeats (STRs), which are patterns found on DNA strands. Forensic scientists use a specialized test that focuses on male (Y) chromosomes. Y-chromosome DNA comes from fathers who pass their Y-STR DNA profiles to their male offspring. Barring a mutation, the profiles remain unchanged. Every male in a paternal lineage has the same Y-STR DNA profile. This includes fathers, sons, brothers, uncles, nephews and a wider group of male relatives, even out to third and fourth cousins.

NIJ has funded research on Y-STRs for years, believing that it would give forensics experts a powerful and important tool in certain cases.

Testing of Y-STRs in the Mary Sullivan case showed a match between DNA from the crime scene and DeSalvo's nephew. According to Boston officials, this match implicated DeSalvo and excluded 99.9 percent of the male population. But because a Y-STR profile is common to a group of male family members, it does not yield the more precise match to a particular individual available in other DNA tests.

Armed with the Y-STR testing results, Boston authorities went a step further and exhumed DeSalvo's body in July 2013 so they could conduct a confirmatory test using a DNA sample directly from DeSalvo. DNA extracted from a femur and three teeth yielded a match — specifically, DNA specialists calculated the odds that a white male other than DeSalvo contributed the crime scene evidence at one in 220 billion — leaving no doubt that DeSalvo had raped and murdered Mary Sullivan.

Since 2005, NIJ has awarded more than $73 million to more than 100 state and local law enforcement agencies through its Solving Cold Cases with DNA competitive grant program. This funding has allowed the agencies to review more than 119,000 cases. The funding has also facilitated the entry of almost 4,000 DNA profiles into the FBI's Combined DNA Index System, yielding more than 1,400 hits.

The program has given agencies the opportunity to put resources toward solving homicides, sexual assaults and other violent offenses that otherwise might never have been reviewed or reinvestigated. Crime scene samples from these cases — previously thought to be unsuitable for testing — have yielded DNA profiles. And samples that previously generated inconclusive DNA results have been reanalyzed using modern technology and methods.

Thanks to these cold case funds and the latest Y-STR technology, the Boston Police Department was able to solve the mystery surrounding Mary Sullivan almost 50 years after her death.

About the Author
Philip Bulman is a former NIJ writer and editor.


The Crime Scene Investigator Network gratefully acknowledges the U.S. Department of Justice, Office of Justice Programs, National Institute of Justice, for allowing us to reproduce, in part or in whole, the article Solving Cold Cases with DNA: The Boston Strangler Case. The opinions, findings, and conclusions or recommendations expressed in this article are those of the author and do not necessarily represent the official position or policies of the U.S. Department of Justice.