Recently, I was contacted by a former student1 who now works for a municipal police department2. She was having difficulty in processing some evidence from a home invasion robbery case she was working. Her problem was that she had tape that had been used by the suspects to bind the victim. This tape was about 2 inches wide and clear like scotch tape. It is usually used for sealing boxes. This tape, when held up to the light, revealed a very good quality latent fingerprint. Her quandary was how to process the tape to enhance the latent fingerprint so the latent print examiners could compare it to the suspects.

Using a roll of tape she purchased at a local store, she tried using sticky-side powder and gentian violet to enhance prints she had deposited on the test roll of tape. She was unable to achieve the desired results in developing the latent prints to the degree necessary for comparison.

I suggested that she try using Small Particle Reagent. "SPR" is usually used when processing wet surfaces and it adheres to the print. Once dry, it can be lifted off the surface using fingerprint lift tape and put on a lift card. With the tape, it can be sprayed right on the adhesive side of the tape and handled in several different ways. The first, and best method, is to spray the tape and place it directly onto the latent print card. Using a sponge or paper towel, squeegee over the tape and it will adhere to the card. The resulting latent print is of extremely good quality, see example 1. 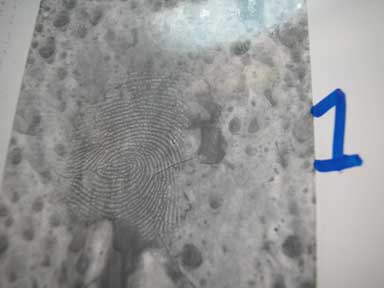 The second method is to spray the "SPR" onto the adhesive side of the tape and then rinse it off under running water. The tape is again placed on the lift card and squeezed to allow it to stick to the card. The result is somewhat disappointing. See example 2. 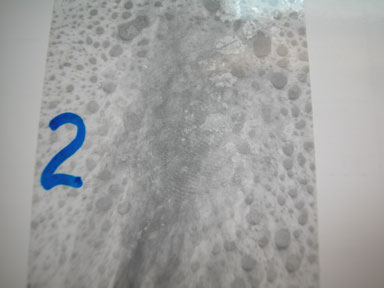 The third method is the same as method number 2 with the exception that after the initial rinse, "SPR" is sprayed on the tape again. After letting sit for a few seconds, re-rinse and place on the lift card and squeegee as before, see example 3.

As you can see, the results are a little bit better but still nowhere near as good as using "SPR" and placing it directly onto the card without rinsing.

After my friend practiced a few times to become comfortable with the process, she applied the "SPR" to the evidence and obtained an identifiable latent print! The latent unit was able to identify the suspect because of the print and an arrest was made.

In a similar case, another municipality3 had a theft case where a sealed package was delivered by one of the national delivery companies. The housekeeper accepted the package and took it into the study and laid it on the desk so the resident would see it. The package contained an item of jewelry that she had ordered and was quite expensive.

When the homeowner arrived, she opened the package and discovered that the item of jewelry was missing. Examining the package, she found that someone had slit the tape holding the bottom flaps together, removed the contents and re-taped the flaps together. After calling the police, the homeowner discovered that a plastic dispenser containing a roll of sealing tape that had been in a drawer of the desk was now on top of the desk. Officers observed what appeared to be a fingerprint impressed in the adhesive near the cut end of the tape.

After submitting the dispenser and tape to the agencies crime scene unit for processing, the detectives were called and elimination prints were taken of the family and staff who were legitimately in the house. The crime scene investigator4 used the "SPR" method and the resulting fingerprint was developed. 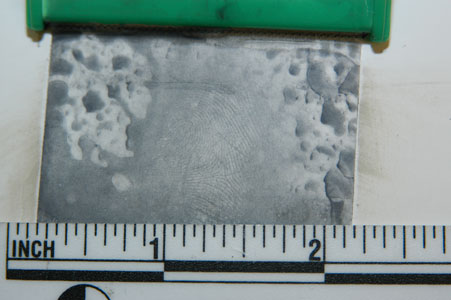 This is a photograph of the actual piece of
evidence after being processed with "SPR."

As is plainly visible, using "SPR" on tape produces excellent results and should be considered when processing the adhesive side of tape. I have tried this method not only on the clear scotch tape but also on masking tape and duct tape. I had less than desirable results on those two types of tape. The contrast with the black "SPR" on the duct tape was not enough to make the print visible enough for examination. Possible using "SPR" of a different color would help with the contrast issue. 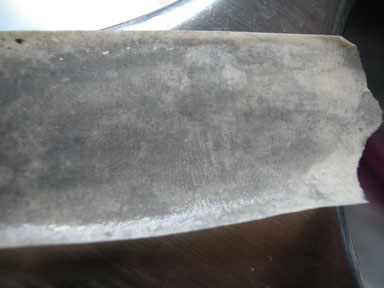 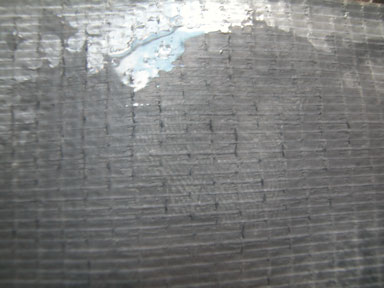 As is evident, ridge detail is visible but so light that comparisons would be difficult at best. With any technique, the protocol of visual examination and photographing the item and anything observed prior to processing is recommended. After the evidence is developed, it should also be photographed before any attempts to lift or recover it are made. Additionally, one should practice on items that are not of an evidentiary nature before attempting to try a new method on actual evidence.