I was a newly promoted detective for the Joplin Police Department. I really wanted to learn the ropes quickly, but this not what I had in mind. With 7 homicides in one year, we faced what constituted a crime wave for our small community. I stood in the doorway of one of these murder scenes, the beating death and robbery of a retired gentleman. Inside the house was a badly beaten murder victim; outside the house, but inside the yellow tape was a number of officers that equaled the population of a small city. The Chief was inside for an update, one detective was eating lunch, and a couple of cops were smoking. Officers were standing around talking. Some with only the jokes and usual speculation, but others were having meetings and discussing investigative possibilities. That was standard operating procedure then for Joplin PD, a Police Department of about 70 Officers and 50,000 citizens in Joplin, MO. We often faced big city crime without big city resources. We were seen as a very professional and progressive department, yet such a lack of crime scene integrity was normal operating procedure. Why? Officers were inside the tape to hide from the media, onlookers and curious gore chasers. They were careful not to disturb any obvious evidence, but shouldn't there be a better way to handle large scale scenes? The solution that I now teach to cops and college students is Multi-Level Containment. You may have seen large agencies use this technique, but you may not understand the value for all agencies faced with important crime scenes. Here is how your agency can insure crime scene integrity while conserving manpower and budget dollars:

The most basic and superficial containment, this is the crime scene tape that surrounds the crime scene itself. The first level is usually determined by responding patrol officers and perhaps modified slightly after the initial chaos dies or the investigators show up. Properly done, this level of containment surrounds all places where evidence might be, with a bit more for extra insurance. Make sure to remember possible areas of entrance and egress by the suspect as these are the most commonly forgotten when containing a crime scene. Regrettably, first level containment is all the protection most crime scenes get. As illustrated earlier this just doesn't cut it for the big scenes because everyone does everything inside the tape.

Though taking security to a higher level, this is not as complicated as it sounds. When crime scene processing officers arrive, they put up a second barrier of crime scene tape that completely surrounds the first level making a buffer zone. The secondary level solves several problems: Officers and Command staff have a place to meet where they cannot be bothered by civilians. Equipment can be stored in this secondary area and even makeshift desks made from folding tables can be erected. If you have some sort of crime scene vehicle it can be parked in this area and the area can serve as an established place for taking breaks and for crime scene trash. Your crime scene log is should be kept in this area and signed only by those who enter the first level or it can be signed by officers as they enter the second level. The latter option is still advantageous as officers will not have to leave the scene for equipment and breaks, so there will be a lot less signing in and out. Hopefully there will be no evidence discovered in this level if the first level was properly placed. However, if you do find something (like a footwear or tire impression) outside the first level but still inside the second level, having it within a protected area could still save officers considerable explanations in court. If you can not completely surround the first level with a second level, don't worry; the idea is that you find some place that adjoins the first level for you to cordon off for your purposes. As long as the first level of containment is well secured, a small adjoining secondary level could meet your needs without it having to completely surround the first.

This third level is where is where manpower and vehicles come in to play. Perimeter containment is done at most scenes to varying levels. This perimeter is created with barricades and police vehicles set up around the secondary tape. Roads are blocked to keep unauthorized vehicles away from the crime scene and foot traffic routed elsewhere. This level may be tighter if you have media trucks trying to get as close as possible and civilians trying to get right up to the crime scene tape. Man power needs vary depending upon how much foot traffic and unauthorized vehicles you are trying to keep out and how many access points that you have for authorized vehicles. The point of perimeter containment is that you keep your first and second level of containment more secure by insuring that unauthorized personnel will not be close enough to intrude upon your crime scene.

At your next big scene secure at least two levels of containment. Your Lieutenant will have a place to eat his burger without being asked for an interview from the local NBC Affiliate. Multi-Level containment is an effective tool for solving a common problem. Sometimes the best solutions are also the most simple. 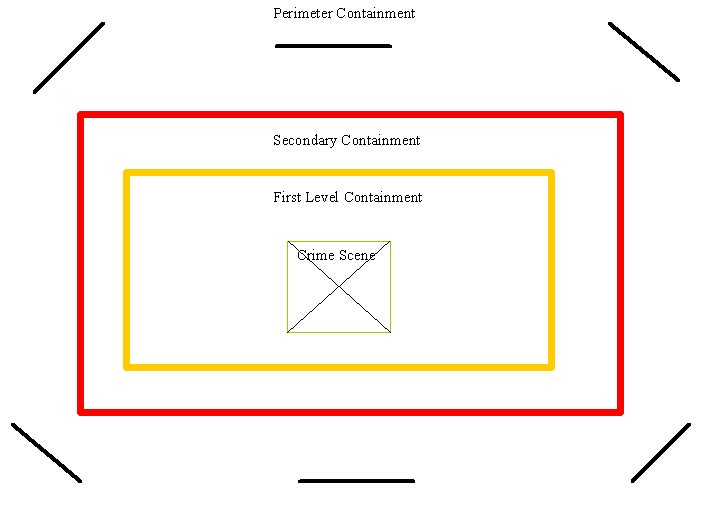