When investigating crimes involving gunshots and bullet holes, crime scene technicians must be cognizant of holes and defects in rubberized plastic-composite materials used in most new cars' bumpers, fascias and guard strips and investigate accordingly to determine if the damage was caused by a bullet. Accurate measurements of well-formed bullet holes are necessary to properly determine the angle of impact.

An argument in a crowded shopping center parking lot leads to an exchange of gunfire between two rivals that resulted in the death of one of the men. Witnesses at the scene provided conflicting accounts of the incident. Some said each man fired one shot at close range. Others reported hearing only one shot. The surviving participant claimed the victim fired at him first. Crime scene techs who processed the scene recovered and documented evidence accounting for the shot fired by the first man but cannot account for the shot fired by the second man, the victim of the homicide.

During a recent crime scene tech training session on shooting incident reconstruction, an interesting facet of bullet holes in the plastic-composite door guard strip on the car door panels used for the training session was noticed. In preparation for the training, instructors fired several bullets at different angles, known and unknown, at car door panels. After classroom lecture and exercises, the crime scene tech “students” examined the holes in the door panels to determine the trajectory and angle of impact of the fired bullets. 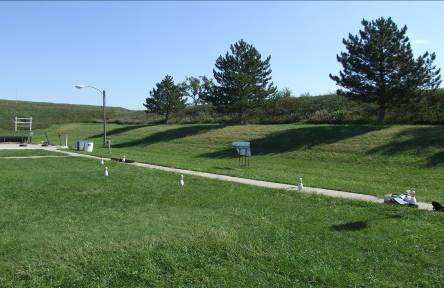 The door panels used during the training session were scrap parts from old, accident-damaged Lincoln police cruisers. The panels were equipped with rubber-plastic composite bumper guard strips. These strips run the length of the door panel just under the "LINCOL" decal. 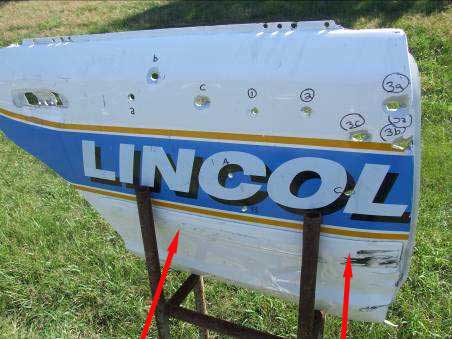 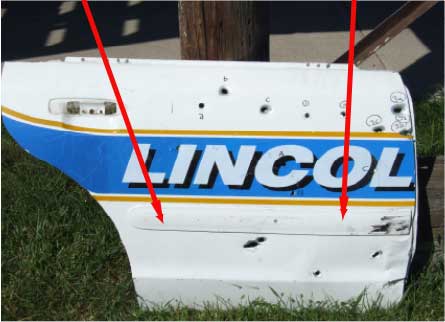 While these bumper guards were not the specific intended targets of the test-fired bullets, a few of the shots struck and penetrated these plastic-composite strips. In examining this damage more closely, several techs noted the entrance "wounds" in the plastic material appeared markedly different than the bullet strikes in the metal door panel. The elasticity of the plastic material did not leave what would be considered a characteristic bullet hole. 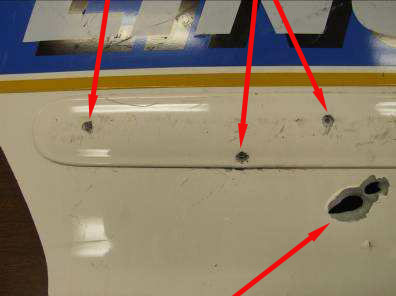 To determine the approximate angle of impact and trajectory, the crime scene techs used the trigonometric relationship of the width and the length of the bullet hole.

The following photographs depict these differences.

During the initial scene investigation, crime scene technicians noticed a small dent/defect in the plastic-composite rear bumper fascia of a vehicle parked near the shooting scene. Upon first inspection, the damage did not appear to have been caused by a bullet. A few weeks later, the owner of that damaged vehicle opened the trunk to retrieve something and noticed the interior damage and found the fired bullet.

The shooter was still facing charges, but this evidence corroborated his claim that the homicide victim fired a shot at him.

Due to variances in the size of bullet holes and impressions, the caliber of the bullet cannot be determined simply by the size of the bullet hole. Calculation of the angle of impact should be within a reasonable range that can be corroborated by placing a probe through the two corresponding bullet impressions (exterior and interior holes). Accurate measurements of angles of impact of well-formed bullet holes still have an error rate of +/- 10 degrees. If the angle of impact was 80 degrees, a reasonable calculation would be 70 degrees to 90 degrees.

To complete a thorough crime scene investigation of a gunfire-related offense, crime scene technicians must closely examine any plastic-composite material for damage and defects that may have been caused by bullets.